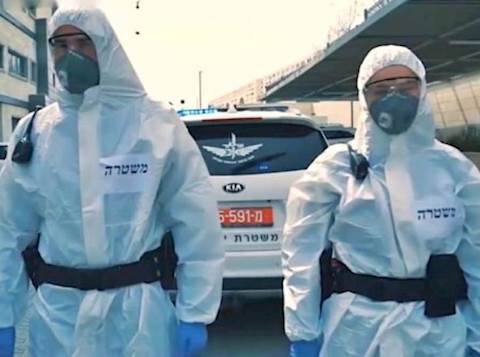 A total of 1,930 Israelis have been diagnosed with the coronavirus as of Tuesday evening, with 34 patients in serious condition, the Health Ministry stated. A total of 49 patients have recovered from the virus.

A second death from the coronavirus in Israel was recorded on Tuesday when a 67-year-old woman, Malka Keva of Bat Yam, passed away in Wolfson Medical Center in Holon. Keva had serious underlying illnesses and had been hospitalized in the ICU on a respirator for a week. It is unknown how she contracted the virus.

A third fatality in Israel was announced on Tuesday evening when an 87-year old man passed away in Hadassah Ein Kerem Hospital, the hospital announced on Tuesday evening. The man, who suffered from several serious underlying illnesses was transferred from the nursing home he lived in to the hospital at the beginning of the week when he was already diagnosed with the virus and his condition swiftly deteriorated.

Prime Minister Binyamin Netanyahu held a seven-hour meeting on Monday with senior government officials, during which he said that up to one million Israelis could be infected with the coronavirus and up to 10,000 could die, chas v’chalilah, according to a Channel 12 News report.

According to news reports, it was decided at the meeting to tighten restrictions on Israeli citizens, with public transportation to be completely suspended, all stores but supermarkets and pharmacies closed and an increased police presence on the streets to ensure citizens are leaving their homes only for essential purposes. The details of the lockdown, which will apply for a seven-day period, are expected to be announced on Tuesday.

The government also decided to establish an economic relief program for business owners and self-employed workers.

Meanwhile, the IDF has designated eight battalions, one for each police district, to assist police in enforcing a national lockdown if and when it is announced.

A pediatrician at Hadassah Har Hatzofim in Jerusalem was diagnosed with the coronavirus on Sunday, requiring medical staff members and two children to be sent to quarantine. A hospital spokesperson said that the pediatrician also worked at the Leumit Kupat Cholim, which has been closed down for the time being.

About 260 Israelis scheduled to return to Israel from Italy on Monday will be quarantined at a “coronavirus hotel” in the north, the Kinar Hotel near Tiverya. The Defense Ministry will meet the passengers at Ben Gurion Airport and transfer them to the hotel.