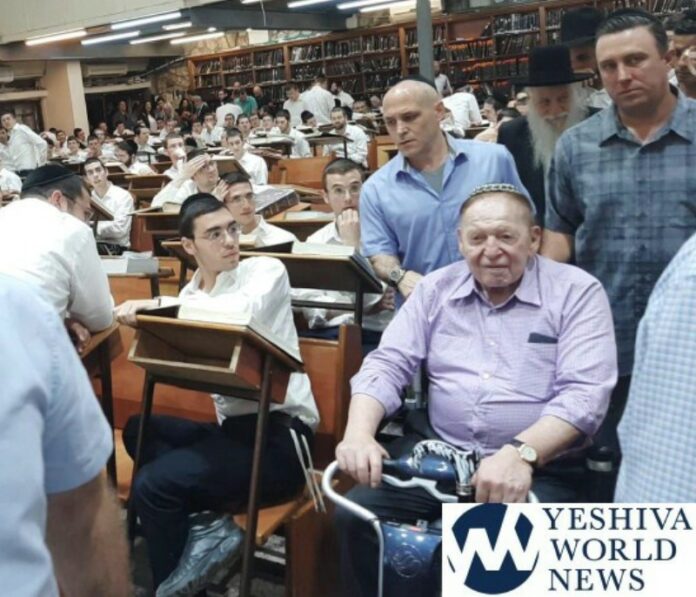 Sheldon Adelson, the founder, chairman and chief executive officer of Las Vegas Sands Corp., has died following a battle with cancer. He was 87.

Adelson was diagnosed with non-Hodgkin’s lymphoma in 2019 and recently stepped away from the company to resume his treatment, the company said on Jan. 7.

Adelson has been a longtime donor to the Republican Party, giving more than $430 million to conservatives during the 2020 campaign. He was an early and longtime supporter of President Trump during his initial run for the White House.

Adelson, who is survived by his wife Dr. Miriam Adelson and five children, had a net worth of $35.6 billion as of Jan. 11, according to Forbes.

A funeral will be held in Israel, the birthplace of Miriam Adelson, with plans for a memorial service held in Las Vegas to be announced at a later date, according to the company.

Adelson made news in the Chareidi world a few years ago, when he paid an unexpected visit to Ponavezh Yeshiva in Bnei Brak.

“Sara and I are heartbroken by the passing of Sheldon Adelson.

He was a wonderful friend to us personally and an incredible champion of the Jewish people, the Jewish state and the alliance between Israel and America.

The warmth of his heart, the clarity of his thinking and the decisiveness of his actions were truly exceptional.

From humble beginnings in a suburb of Boston, he rose to be one of world’s greatest entrepreneurs and philanthropists.

With his wife Miri he contributed endlessly to strengthening the Jewish people and the Jewish state, funding breakthroughs in medicine and science and advancing higher education. He gave anonymously to help victims of terror and countless other people in need.

Sara and I join Miri and the family in mourning a great friend, a great man, and a great Jewish patriot.

We will never forget him. May his memory be blessed.”

Sheldon Adelson’s life represents the best of the American dream. Susan and I send our deepest condolences and prayers to his family as the world mourns his passing. pic.twitter.com/QkL60v7iOE

Sad to hear about the passing of Sheldon Adelson. See my statement below: pic.twitter.com/tnWr4ynQXJ