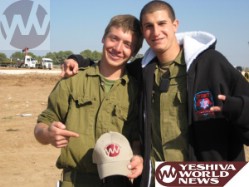 LINKS BELOW: As thousands of troops received their final orders to proceed into the ongoing battle in Gaza today, YWN embedded with the legendary Yad Eliezer chessed organization and the remarkable HEART team, and captured the frenetic  moments of preparation before deployment.

It is not often that one gets to join military personnel during an actual war in the battle ground.  However, because of the long standing admiration the IDF has for Yad Eliezer, we were allowed to enter a secured military zone less than one kilometer away from the fighting in Gaza.  When we were first told that we would be granted access, we had no idea what the packages that we were about to deliver really meant to the chayalim.  Seeing their faces when we began handing out the packages is something that will forever remain etched in all of our minds and hearts.

Last evening, many seminary girls and other volunteers worked for hours making the packages that we would distribute today.  The packages consist of food and drinks as well as some personnel hygiene products that the soldiers lack in the field.  Also included in the package is a tehillim which many of the non religious chayalim appreciate as well.

It truly was an unbelievable experience davening mincha side by side with soldiers in flak jackets and in full military gear.  Many of the soldiers we davened with were preparing to go back into Gaza two hours later.  After mincha, we sang and danced with them to what can only be described as a monumental Kiddush Hashem. The mutual respect that everyone there had for the soldiers and the respect that they had for the chesed that Yad Eliezer & the HEART Team does, is surly the reason Hashem is helping us win this war.