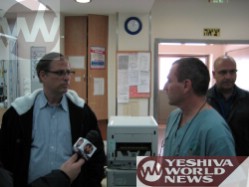 VIDEO & PHOTO LINKS BELOW: It takes quite a bit to impress NYC Hatzolah EMTs and paramedics, the volunteers exposed to the state-of-art medical system that the Big Apple offers, but just ask the members of the HEART (Hatzolah Emergency Ambulance Response Team) Team who received a VIP tour of the Soroka Medical Center in Beersheva, the only level-1 trauma center in southern Israel, and they will tell you they were indeed impressed. Soroka is one of only four in the country. The others are Hadassah Ein Kerem (Jerusalem), Tel Hashomer (Tel Aviv), and Rambam Medical Center (Haifa).

We were met at the entrance to the emergency room/trauma center by Irit, who is assisting the hospital’s spokesperson who is inundated with media and other visitors as the hospital is the primary care facility in Operation Cast Lead. On the way in I did take notice of the media tent erected to the side, providing shelter and hot drinks to the many reporters from around the world, waiting for the incoming wounded to begin rolling the cameras, seeking to bring the war into living rooms around the globe.

Irit heads the medical center’s external affairs department. She skillfully guided the group into the hub of the facility’s shock trauma area, where we were met by Dr. Gadi Shaked, head of trauma medicine and Dr. Gilbert Sebbag, the hospital’s deputy director-general.

Like I said, this group of pre-hospital medical professionals have ‘seen it all’ but admittedly, by their accounts, this place was tops. The physicians quickly realized by the questions that while these guys are not trauma-certified doctors, there are also not laymen by any stretch of the imagination. Their questions alerted the experts to a level of expertise and familiarity. and the responses were commensurate with the medical proficiency of the visiting delegation, the HEART Team. It quickly became apparent that wounded soldiers were indeed in good hands, and Soroka and its team were indeed fitting shluchim as the frontline life-saving trauma center for the most critically wounded.

Permit me to share some statistics with you that may give you a picture of the scope of the medical center’s capabilities and responsibilities. The trauma specialists do not only address the wounded military personnel, but are no strangers to blunt trauma resulting from civilian vehicular accidents and all other causes of trauma that might compel transport to the center. They average 1.5 critical trauma cases daily, some 3,000 annual hospital admissions via the trauma unit, of which some 450 are truly serious cases, comprised of 80% blunt trauma, crime-related trauma (gunshots) and more. For some of you a bit more familiar with Israeli geography, Soroka serves the population from Kiryat Gat to Eilat, the only level-1 trauma center in this vast area. There are other capable hospitals, but not level-1 trauma centers, which in a life-and-death situation resulting from trauma makes a significant difference.

Some of the big decisions as to the hospital’s status in wartime, as is the case today, are made by the Health Ministry Emergency Division, based in part on consultations from the IDF Homefront Command officials. Soroka has been on 24-hour alert since IDF soldiers entered Gaza on Shabbos afternoon, January 3, 2009. As per current protocol, as many patients as possible are diverted to other trauma centers to permit Soroka to remain as empty and ready as possible, with the realization that by chopper, the diversion to Tel Hashomer Hospital is literally only another 2-3 minutes. When we arrived, the unit was “clean and empty” as Irit put it, quickly adding “we hope it remains this way”.

The hospital now has 14 operating rooms. In actuality, there are 18 but some were closed by the Homefront as the state-of-emergency was declared and others opened in bunkers that conform to the regulations governing Operation Cast Lead. Remember, Beersheva too is in rocket-range, and the trauma unit and many other areas of the complex are fortified. A rocket alert gives the staff 45 seconds before impact, “a very quick 45 seconds” Dr. Sebbag explains. The trauma unit is also operating on positive pressure, permitting the teams to operate for up to 48 hours without special suits in the event of a chemical or biological attack chas v’sholom. There is also an impressive 38 SICU (surgical intensive care unit) beds.

Needless to say the emergency room and trauma center maintain communications with all relevant agencies, including the IDF Southern Command, MDA, police, and various other military and emergency units which will not be mentioned in this forum. The situation in the hospital permits the management team to maintain a pulse of events, with cameras providing real-time views of the trauma unit, heliport and other areas. In addition, mounted on a wall is a prominently displayed large flat screen, which flashes constant updates as to the number of available unit beds, ICU beds, trauma beds, units of blood and type, surgical units and more. Dr. Sebbag and his team are constantly aware of the real-time situation in this vast complex, permitting them to make the critical decisions at any moment.

The staff in-house can address up to 20 patients, event multiple critical victims simultaneously, and there is a call-out system in place that can alert surgeons and other team members as notification is received from the IDF, permitting the trauma unit to accept 20-50 victims, or even large numbers chas v’sholom. There is notification from the army to permit staff members to take their stations since the flight from Gaza is 7 minutes and they are usually aware when the chopper heads out into the battlefield to attempt extrication and transport. Actually, they will receive notice when the battalion physician makes the decision to summon a chopper, permitting them ample time to get into receiving mode.

The hospital performs 32,000 surgeries annually, and delivers 30,000 children, about 45 a day, leading the nation in births [due to the large Bedouin population].

Anyway, by now you have enough of an understanding to know that soldiers flown from Gaza to Soroka have as good a chance as possible of survival. That is the point. These shluchim are tops and the rest is in Hashem’s hands.