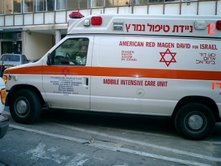 In yet another tragedy on Israel’s roadways, six people, four children and two adults were killed near Kfar Saba on Thursday afternoon when a truck flipped over onto a vehicle. Three others, two children and an adult, remain in critical condition in Haifa’s Rambam Medical Center.

The accident occurred on Route 55, near Kfar Saba. The victims were transported from the accident scene to Tel Hashomer, Beilinson and Meir Hospitals.

According to the preliminary investigation, a commercial vehicle that arrived at Kever Binyamin Junction turned left, and a semitrailer slammed into it. A paramedic on the scene explained two trucks collided and somehow, one of them flipped onto a van as a result. The vehicle was so badly damaged; rescue workers were unable to identify it.

The victims were identified as residents of the Israeli Arab community of Kafr Kassam.