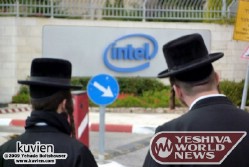 According to eyewitness accounts from the Eida Chareidis shabbos protest at Intel, including reports from persons not members or supporters of the Eida, the protestors kept their word and maintained a civil orderly presence, as was promised to Tzion District police commander, Bruno Franco.

Franco met with rabbonim on Thursday, explaining they gave him their word the protest would not be disorderly, and they kept their word. It appears the at-risk youths, the delinquents if you may, were there, seeking action, stirring up the scene, as they frequently do.

Their efforts were indeed effective, resulting in Intel security personnel using pepper spray, injuring tens of chareidi protestors. Members of the press report their cars were damaged, by rocks and other objects, and some sustained light injuries as the situation escalated.

Police are being blamed for not be prepared, but Franco denies the charges, insisting he men were ready and performed as expected.

Eida leaders are signaling the Intel battle will not be laid to rest, insisting they will not permit the continued expansion of chilul shabbos in the city.

MK (Meretz) Nitzan Horowitz is outraged, explaining he fears if chareidim continue to harass Intel, the hi-tech giant may pull out of Jerusalem and the loss of jobs would be catastrophic.

Intel began operating in the Har Chotzvim Hi-Tech Park in 1985, and its ‘sterile room’ operates 24/7, leading many to question why the shabbos battle today, explaining the operation of portions of the Jerusalem facility on shabbos is not a new development. Intel Jerusalem employs about 600 professionals and the company nationwide provides employment for 6,470 people.

The head of the Vaad L’maan Shabbos, Rabbi Yitzchak Goldknopf appears equally angered, insisting the tzibur acted responsibly as instructed by rabbonim shlita and it is time to bring the delinquent youths under control.

Speaking with Galei Tzahal’s (Army Radio) Nir Raskin, the rav acknowledges that he is now aware the factory has been operating on shabbos for the past 20 years, but he and his colleagues were unaware of this fact.

When asked if this new front has been undertaken to shift attention from the failed battle concerning the city’s operating Karta parking lot on shabbos, Rav Goldknopf stated this is simply not so, emphasizing this is a legitimate battle “L’shem Shamayim” and nothing less.

The rav stressed that the fringe element responsible for the violence is not acting in accordance to the instructions of rabbonim and their actions are not welcome.

Intel officials view the situation as perplexing, explaining they are maintaining the religious status-quo and from their end, nothing has changed.