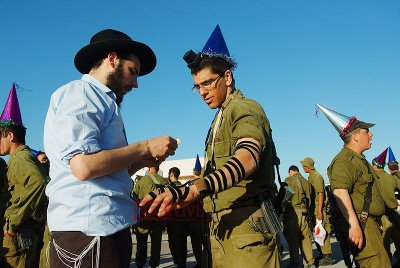 Seeking to prevent Israeli school children from being ‘brainwashed’, Meretz MK Nitzan Horowitz is proposing a bill that will make it illegal for Chabad Shluchim to set up a tefillin stand outside a school or any educational institution. While it is clear to all that the pro-secularist MK is targeting the Chabad shluchim who are moser nefesh around Eretz Yisrael [and the world], seeking to bring the mitzvah of tefillin to the many that would otherwise not merit it. Horowitz explains his bill is directed against all religion peddling, including Jews, Buddhists or other religions.

Seeking support for his anti-Torah position, Horowitz sent a draft of his bill to the ultra-secular Ramat Aviv Action Committee, which is engaged in an ongoing war with local Chabad shluchim, seeking to distance their message of yiddishkeit form their neighborhood.

In his letter to the Ramat Aviv secularists, Horowitz states that while the activities of such people are by and large within the framework of the law, many find them most objectionable. He feels that once such actions are directed at minors, without their parents’ consent, the actions of such individuals are no longer legitimate.

He acknowledges the pain and suffering of the action committee members, who have been waging their battle for the past year against the Chabad shluchim who set up a tefillin booth weekly outside the Alliance School, pointing out that not only do they seek to get youths to put on tefillin, but they also try to persuade them with other educational materials intended to bring them back to religious observance.

This he explains and other cases prompted him to push for legislation that will make it illegal to peddle religion outside of schools. His bill was submitted last week, and he hopes to enlist enough support in Knesset to ban religious booths in proximity to schools.

Chabad spokesman Rabbi Menachem Brod stated perhaps one should present a bill opposing this sad and absurd bill, pointing out that ironically, Horowitz was a journalist and “fought like a lion” regarding freedom of expression. Now, he is doing just the opposite, with tenacity, seeking to stifle the voice of free choice that seeks to provide people with an opportunity to become acquainted with their heritage.