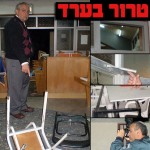 [Click on image to ENLARGE] Two women were lightly injured and four men were arrested on shabbos afternoon in another shabbos of clashes between Gerrer Chassidim and Chabad Chassidim in Arad.

It appears the situation repeated itself during shachris, not only disrupting the davening but also a bar mitzvah that was taking place, with the choson bar mitzvah being the rav’s son. All of this however was the least of the confrontation, which escalated to a full brawl during the shabbos afternoon hours.

Chabad mispalalim report “A mob of at least 100 Gerrer Chassidim” reportedly hurled chairs and tables at the two women who had entered the men’s section between the afternoon and evening services to get in out of the rain.

One woman, age 54, was struck in the face by a chair; her 19-year-old daughter was hit in the head by a table. According to eyewitnesses, Gerrer Chassidim hurled the furniture directly at both women while cursing them and calling them slurs unfit to print on YWN.

The women, who spoke on condition that their names be withheld, said the head of the local Chabad boys’ school had told them they could enter because prayers were over and it was the closest entrance into the building.

“It had begun to rain and we were getting wet. Everyone else had already left the room and had gone into other side to start seuda shlishis,” explained the older woman.

The mob also broke down two of the doors leading to the smaller room where the meal is eaten, both of which were locked during services. There was other damage to the building reported to the police by one of the synagogue’s sextons as well.

By 11:00pm on motzei shabbos, Arad’s small police station was still processing criminal complaints; numerous people from both the Chabad and Gerrer communities were turned away and told to return in the morning to submit complaints as there was not enough manpower available to handle the load.

Police have repeatedly been called to quell disturbances at the shul over the past several months, and clashes have escalated between Gerrer Chassidim, who insist their greater numbers entitle them to take over the shul, and the Chabad Chassidim who formally merged with the congregation several months ago.

The tension between the two groups, which has simmered beneath the surface for several years, broke out into the open following the death of Rabbi Bentzion Lipsker z”l, Arad’s Ashkenazi Chief Rabbi and the rav of the shul for some 35 years.

Lipsker’s son-in-law, Rabbi Yaakov Mendelsohn, succeeded him as the synagogue’s rabbi, a reality that does not meet the approval of all of the city’s frum residents.