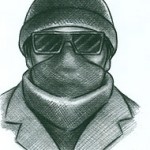 This is not to diminish the seriousness of the fact that a man was murdered last week in a jewelry store holdup, but the sketch that the police released Wednesday got the NY Times Cityroom Blog wondering: how is this going to help anyone catch the killer?

The drawing, at left, shows a face almost completely obscured by a hat, sunglasses and a scarf pulled all the way up to the bridge of the nose.

Even combined with the surveillance video the police released, which shows, basically, a male adult of average build, dressed in black and carrying a duffel bag, walking down Madison Avenue, the sketch would seem to reduce the pool of possible suspects only to about a quarter of the population.

Although the killer presumably has shed his disguise, the head police spokesman, Paul J. Browne, said that the sketch served as an important record of how he looked Wednesday afternoon, when temperatures were in the high 30s under sunny skies and the sight of a man bundled as if expecting a blizzard might have seemed unusual.

“Let’s say somebody a block away says, ‘I saw someone with a hat and a scarf over his mouth going this way and getting into that subway,’ ” Mr. Browne said. “It may assist on direction of flight, last whereabouts, that sort of thing, which we don’t have right now.” The killer was last seen heading south on Madison toward 75th Street.