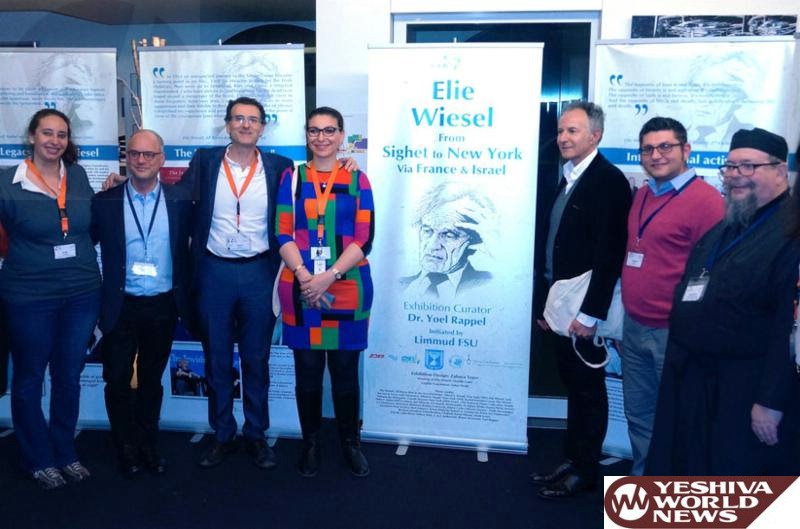 The organization for Russian-speaking Jews Limmud FSU (former Soviet Union) launched a special exhibition this weekend honoring the memory of the late Nobel Prize laureate, renowned author and Holocaust survivor Elie Wiesel. Wiesel, who passed away in July, 2016, maintained a lifelong connection to France, and to Paris in particular, where he arrived after the war and learned French, studied at the Sorbonne and began his career as a journalist.

An opening ceremony took place at the annual Limoud France event, with the participation of more than 600 young people and officials, including M. François Zimeray, the French ambassador to Denmark and a close friend of Wiesel.

Limmud FSU first launched the exhibit, “Elie Wiesel: from Sighet to Ukraine via France and Israel” in August, 2016 in Moscow and since then has mounted the show in London, New York, and Jerusalem. Limmud FSU Founder Chaim Chesler initiated the exhibition, which was curated by Dr. Joel Rappel, founder of the Elie Wiesel Archive at Boston University.

The exhibition includes dozens of photographs of different milestones in Wiesel’s life, including his birthplace and family in Sighet, Romania; his imprisonment at Auschwitz and subsequent liberation from the Buchenwald concentration camp; his life in France and work as a journalist; his many published books, such as The Fifth Son, The Trial of God, The Jews of Silence, and Night; his receiving the Nobel Peace Prize in 1986; as well as his decades of activism on behalf of Holocaust commemoration and remembrance.

“Elie and I were close friends. We met each other frequently and discussed many subjects, especially those related to the subject of universal human rights. I miss him so much,” said Zimeray. “Today we are aware of a serious and dangerous situation of human rights violations (such as terrorism, for example) and therefore the Jewish community tends to close itself and keep its distance from the wider world, from humanity. And this should not happen. We must stay together; it will make us stronger.”

“We are proud to launch this exhibition for the first time in France, a country where Elie Wiesel studied, and where he began his distinguished journalistic and writing career,” Kogan said. “His legacy is important for us, especially because of his contribution to the struggle of Soviet Jewry for the right to emigrate. We of Limmud FSU are also waging a struggle for the Jews from former Soviet Union, not in a physical sense but in the spiritual and educational sphere. The work of strengthening our Jewish identity is the struggle of our generation.