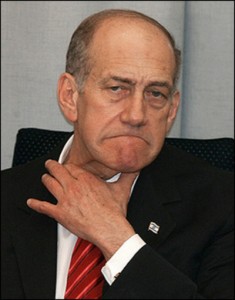 Appearing before the Rishon L’Tzion Magistrate’s Court on Sunday, police told the court that suspect Shula Zaken is suspected of passing over NIS 1 in bribery funds to Ehud Olmert. Zaken is also alleged to have accepted NIS hundreds of thousands, in cash, jewelry and even a painting. She is alleged to have played a role in bribe funds passed to Uri Sheetrit, a former chief Jerusalem engineer as well.

When Zaken appeared for the hearing, she stated that as a woman who believes in Hashem, it is easier for her to endure this ordeal. The court remanded her to house arrest with restrictions for ten days.

The only Holyland suspect who remains in custody is Meir Rabin, with police continuing to insist his release as an alleged kingpin in the bribery fraud investigation would result in Rabin compromising the ongoing investigation.