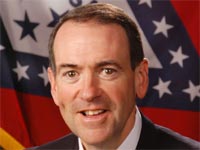 Former Arkansas governor Mike Huckabee today called on the United States to free Jonathan Pollard, who has spent the past 26 years in a federal prison for passing classified information to Israel.  During a visit to Israel, Huckabee, a former Republican Presidential candidate who is one of the front runners for the Republican nomination for President in 2012, said that Pollard should be released as proof of America’s friendship to Israel.

Huckabee, who finished second to Senator John McCain for the Republican nomination for President in 2008, served as the Governor of Arkansas from 1996-2007.  He is currently the host of “Huckabee,” which is a top-rated program on the Fox News Channel.

“Right now we don’t need anything that reflects that we are anything but an absolute ally of Israel,” said Huckabee.  “This [freeing Pollard] would send the right message to the rest of the world, that America is not pulling back on its friendship and relationship with Israel but it is accelerating it and making sure that we are taking every step possible to solidify those bonds.”

In his comments, Huckabee also noted that Pollard has served a disproportionately long sentence.

Huckabee is the latest prominent conservative leader to publicly call for a commutation of Jonathan Pollard’s sentence.  Former U.S. Secretary of State George Shultz, former Attorney General Michael Mukasey, well-known Conservative Republican activist Gary Bauer, and Pastor John Hagee have all issued calls for clemency for Jonathan Pollard.  In addition, former CIA Director R. James Woolsey, former Deputy Attorney General and Harvard Law Professor Philip Heymann, and former Senator and Chairman of the Senate Intelligence Committee Dennis DeConcini, each of whom had the opportunity to thoroughly review Pollard’s classified file and is fully familiar with the circumstances of his case, have called for Pollard’s release.

In addition to Woolsey and Heymann, a wide array of individuals from the national intelligence arena and the legal world have called on the President to commute Pollard’s sentence, including former Assistant Secretary of Defense Lawrence Korb, and Harvard Law Professor Charles Ogletree, who was President Barack and First Lady Michelle Obama’s law professor at Harvard and remains friends with them today.