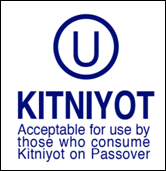 The new symbol of authorization will appear on packaging with the explanatory message: OU Kitniyot: Acceptable for those who consume kitniyot on Passover.

Among the better known customs of Passover is the concept of kitniyot (legumes such as beans, corn, lentils, millet, mustard, peas, poppy seeds, rice, sesame seeds, soybeans and sunflowers), which are avoided by Ashkenazic custom, yet are consumed by those of Sephardic descent. The custom of Ashkenazim not eating kitniyot goes back to at least 13th century France and was instituted because kitniyot are often grown in close proximity to the five grains (wheat, oat, spelt, rye and barley); and because kitniyot can be easily confused with leaven (chametz) or the other way around.

Non-Ashkenazic Jews follow the ruling of Rabbi Yosef Karo (1488-1575) who permits the consumption of kitniyot on Passover. Even then, caution must be taken because the kitniyot may be processed in ways that render them non-permissible to the Sephardic population.*

“Previously, the OU has not issued certification for retail kitniyot products for Passover due to the concern that different symbols of kosher authorization might confuse consumers,” explained Rabbi Moshe Elefant, OU Kosher chief operating officer. “The OU Kitniyot symbol is presented in such manner so as to avoid any confusion and the packages will not show Kosher for Passover except as indicated.”

The label is currently found on a limited supply of products, including: Hagada Cookies Series, Papachoudo Cookies, Osem Bamba, Neptune Spices and Shkediya Sunflower Seeds. These products are manufactured with similar high supervision standards to those of other OU Passover productions, Rabbi Elefant noted.

“While OU Kosher has for years been approving OU industrial kitniyot products for the benefit of the Sephardic community, this has been in the realm of industrial and institutional ingredients,” stated Rabbi Nachum Rabinowitz, OU Kosher senior rabbinic coordinator. “This decision was taken at the urging of our poskim (decisors of Jewish law), to benefit the many kitniyot consumers who relied on various assumptions—rather than actual certification—for kitniyot Passover products.”