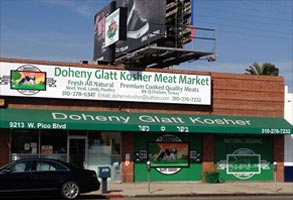 The following is an article from KTLA:

As Southern California Jews continue to celebrate Passover, there’s some shocking news about the meat that may be on their dinner tables.

The Rabbinical Council of California has removed its supervision from one of the area’s most prominent glatt kosher meat distributors.

There are strict religious guidelines for preparation, and it is very expensive to buy.

One distributor who provides meat to restaurants, caterers, and customers in Southern California has lost its religious backing, and an undercover video may explain why.

For Rabbi Shimon Kashani and many of the Jewish faith, eating glatt kosher meat is an important part of their religious practice.

It’s so important that religious supervisors oversee every aspect of the food’s preparation and distribution. And Jewish families pay up to triple the cost of non-kosher meat.

At Doheny Kosher Meat on Pico Blvd in Los Angeles, undercover video and pictures show — at first glance — the rules are being followed.

A supervisor called a Mashgiach unlocks the warehouse and inspects the deliveries.

But the pictures taken by private investigator Eric Agaki have raised serious concerns among rabbis throughout California.

On March 7th, 2013, Agaki videotapes a vehicle at an unsupervised warehouse in Reseda at 5:58 a.m.

The private investigator follows the vehicle to a McDonald’s parking lot, where it’s met by another car, driven by Mike Engleman, the owner of Doheny Glatt Kosher.

Pictures show both trunks open. “They transferred the glatt kosher boxes from his vehicle to the owner of Doheny Market,” Agaki says.

Engleman waits for the Mashgiach to arrive and unlock the door to oversee the delivery of sealed glatt kosher boxes.

But when the Mashgiach appears to leave the site, Engleman’s trunk is opened.

“As soon as the Mashgiach left and turned the corner, he signaled his workers to offload his trunk,” Agaki says.

The boxes offloaded from the SUV are labeled glatt kosher, but their appearance troubles Rabbi Kashani, as does the apparent lack of supervision.

We visited Doheny Glatt Kosher Meat Sunday night after we were told the Rabbinical Council of California — or RCC — as shown the undercover video.

No one would answer questions, except for one loyal customer.

“I would be surprised. I know the people, it’s a rumor,” the customer said.

But just before 10 p.m. Sunday night, many in the Jewish community received an email informing them:

“The RCC announced… it removed its kosher supervision, for cause, from Doheny Kosher Meats located at 9213 West Pico Blvd.”

It went on to say that meat bought there until before 3 p.m. Sunday “is permitted to be eaten and can be enjoyed on Yom Tov.”

The owner of Doheny Glatt Kosher spoke to us on the phone, only to tell us an emphatic “no comment.”

But Rabbi Kashani tells us he believes the group of religious leaders made the right decision to preserve trust in a costly way of life that carries deep spiritual importance.

The RCC is a religious authority, and there is no indication Doheny Glatt Kosher Meats has violated any government laws or regulations.

The private investigator did show us a box of glatt kosher labels from a factory in Iowa and a device for making them that he says he found at that warehouse in Reseda.

It’s unclear if the USDA is investigating this case.