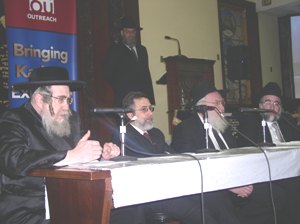 It has become evident that when the OU Kashrus Department visits Orthodox communities through its Harry H. Beren ASK OU Outreach program, the reaction in those neighborhoods is amazing. Following the shiurim and the panel discussions, audiences in the hundreds surround the rabbanim, mob them, shake their hands, and ask more questions before the noted rabbis go home.

Last Sunday, ASK OU Outreach, sponsored by the Harry H. Beren Foundation of Lakewood, NJ, paid it first visit to Boro Park, visiting Agudas Yisroel Zichron Moshe on 50th Street for “Halacha and OU Policy,” the OU’s first session on the relationship between the OU and heimishe hashgochos. According to Rabbi Yosef Grossman, Director of OU Kosher Education, who coordinates all of the Beren programs, “There was an overflow standing-room only crowd of close to 500, with approximately 100 in the Ezras Nashim upstairs.” It was, he said, “the largest crowd for any event in this shul.” He added that “the tremendous feeling of achdus among all the different types of Torah Jews was palpable.”

Among those in attendance were Dr. Simcha Katz, newly installed President of the OU, who traveled from Teaneck, NJ for the occasion; and Dr. Benzion Krupka, of Far Rockaway, Chairman of Kashrus Education. Prior to becoming OU President earlier this month, Dr. Katz was chair of the OU Kashrus Commission.

As always, the presenters were an eminent group, known for their great learning as well as their skills as teachers. They included, for the session on Halacha and OU Policy, OU Posek Rav Yisroel Belsky; Rabbi Menachem Genack, CEO of OU Kosher; Rabbi Moshe Elefant, COO of OU Kosher and a special addition to the panel, the Nirbater Rav, Rav Aharon Teitelbaum, whose presence “demonstrated the close relationship between the OU and other heimishe hashgochos,” Rabbi Grossman said.

An added attraction was OU Rabbinic Coordinator and fish expert Rabbi Chaim Goldberg, who enthralls his audience whenever he gives a presentation. He spoke on current issues regarding the kashrus of fish, including several recent situations concerning insects found in sardines.

When it was over and the audience joined the rabbanim, “There was a mass encirculation /encapsulation/swarming around Rabbis Belsky, Genack and Elefant post-program by the overflowing crowd,” said Dr. Katz, the new OU President.

According to Rabbi Grossman, the reason for the Nirbater Rav’s addition to the panel, besides demonstrating the close relationship between the OU and heimishe hashgochos, was to speak “for the first time publicly about a kashrus issue which began three years ago concerning the acceptance of meat from an animal whose stomach had a discoloration raising the possibility of perhaps having a needle thrust there which would cause the animal to be considered treif. The Rav explained in great detail his and the OU’s position, as well as that of many other experts, that the animal was in fact, 100 percent kosher.”

One significant issue that came up during the rabbi’s panel was the OU’s position to permit Cholov Stam based on Rav Moshe Feinstein, the Chazon Ish and many other halachic decisors, “to provide kosher dairy products for Jews living throughout the United States,” explained Rabbi Genack.

Rav Belsky added that, “At the same time, the OU is not lenient when it comes to other products produced on the same lines as Cholov Stam products, being sensitive to the needs of the non-Cholov Stam consumer.”

Rabbi Elefant pointed out that when the OU has a joint hechsher with a heimishe hashgocho, each hechsher agrees to abide by the stringencies of the other.”

In addition to absorbing the great learning they heard, participants snapped up the extra added attractions, including copies of OU Kosher’s Daf HaKashrus magazine, and a video, “How to Kasher,” with demonstrations by the kashering expert Rabbi Moshe Perlmutter. “Whatever we brought there was taken home. Nothing was left,” Rabbi Grossman said. “The audience demonstrated a tremendous thirst for kashrus information, particularly by the amount of questions they wanted answered.”

Comments of the audience reflected this thirst. “I must say that I enjoyed the conference immensely,” wrote Solomon in an email. “The only problem was that it was too short.”

Noah agreed. In his email he wrote, “Thank you very much and thank you for a fabulous and immensely beneficial presentation last night in the Agudah shul.”