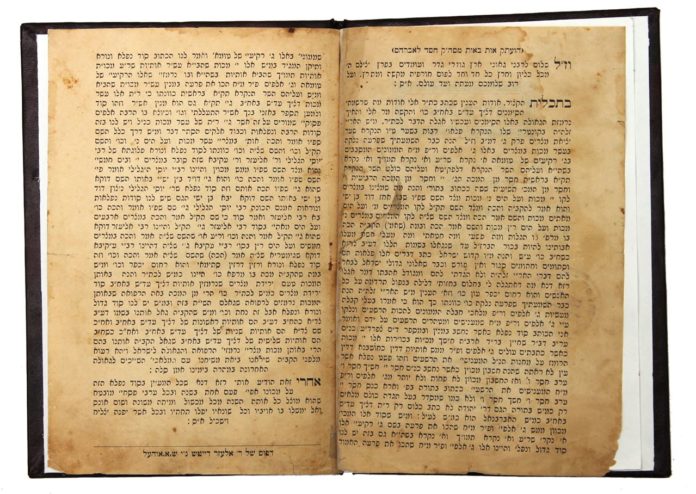 A Segula that saved people from the holocaust?! That is what the Erloi Rav, R’ Yochanan Sofer z”l, tells over (see Haggadah Chassam Sofer published 2004 footnote to Maamar). On the eve of Pesach 1944, due to the panic and confusion that reigned, his grandfather, R’ Shimon Sofer, the Chief Rabbi of Erloi, forgot to adhere to the yearly practice of reciting R’ Shimshon of Ostropoli’s famed Maamar (or Erev Pesach Letter – to be explained) and was murdered a month later. R’ Yochanan himself forgot as well. However, on the eve of Rosh HaShana he remembered and immediately recited the Ma’amar. He ends off, “with help of Hashem, I survived the war…”

In an astonishing testimony, the individual who reprinted R’ Shimshon’s Maamar after the Second World War testifies as follows: ‘I, the one printing this, witnessed with my own eyes, how in the year 1944 in Hungary, the times were very dark. Yet, all those that said this Maamar were saved.

‘So what is in this mystical Letter? Why is it so potent? And why did Gedolim, simple people, Sephardim and Ashkenazim for hundreds of years adhere to this practice of reading this letter known as ‘Maamar Sod Etzba Elokim’ or ‘The Holy Erev Pesach Letter’ every erev Pesach…? That used to be the question but it no longer is! With the new, elucidated Maamar Sod Etzba Elokim available in English and Hebrew this ‘Erev Pesach Letter’ is no longer cryptic, it is literally mind-blowing! (click link below to purchase).

The Maamar is in reality a Dvar Torah on the ten Makkos, plagues, that was revealed to the great Kabbalist and Torah giant, R’ Shimshon of Ostropoli (1599-1648) in a dream. Along with this revelation came the most amazing assurance that whoever learns through this piece once a year and especially on Erev Pesach will, “merit great things. He will be saved from misfortune and will not die a strange death. No man will dominate over him; his enemies will fall before him. In every direction in which he turns he will be successful and he will prosper.” This is clearly not an empty statement as seen above from the words of the Tzaddik of Erloi (the reason for this unusual assurance is explained in the new sefer as well. See further from other Tzaddikim about the Maamar).

Until now though, the Maamar was difficult to comprehend even to those that can learn! Now, carefully explained with a preface and introductory essays, followed by the Maamar accompanied with the fascinating explanations of the Shemesh UMagen, (a commentary on the Maamar written by R’ Chaviv Chaim Dovid Sutton, Av Beis Din in Teveria in the late 1800’s) this work is a pleasure to learn through. It is available in English or Hebrew

.But it’s more than just a Segula or simply an Erev Pesach Tefilla as some mistakenly think, it’s an in depth Torah piece on the ten makkos. And it literally changes your understanding of the ten Makkos. In fact, people who have learned through the Maamar with the commentary, have said that the wonders that are revealed in this Maamar to explain the Makkos has strengthened their Emuna by seeing how every letter in the Torah is accounted for and the spellbinding hints that lie in every word! And it comes with the blessing of one of the greatest Tzaddikim and Kabbalists that lived!

To see how seriously subsequent Gedolim took R’ Shimshon’s words – his Maamar has been reprinted in numerous Haggados by Gedolei HaDor along with the words of his assurance, for hundreds of years (R’ Chaim Falagi in Chaim LeRosh printed in 1852, quoting R’ Chaim Modai who passed away in 1796, Haggadas Megaleh Amukos 1821, Lechem Oni 1835 and many more Haagados and before that in other seforim as early as 1709). Most new Haggados today have it. As well, many Gedolim make sure to learn the Maamar every year. In fact, R’ Moshe Shternbuch Shlita (Gaavad Yerushalayim) writes (Haggada Moadim UZmanim Minhagei HaGra 5747), “due to the real miracles we have heard reported happen to people who learned the Maamar, it is worthwhile to learn it before Pesach as well as after the Seder with all the family members that can comprehend it.

“ The Sephardi Mekubal, R’ Salman Mutzapi z”l learned it every year with his family members (so writes his son, R’ BenTzion Mutzapi Shlita, Pesach BeTzion). R’ Chaim Kanievsky Shlita recites the Maamar every year on Erev Pesach. As you can see, the Gedolim took R’ Shimshon’s word very seriously!Included in this (English) work are other incredible, numerical, Pesach related expositions by R’ Shimshon as well as a biography on this great tzaddik. The Hebrew edition includes the Maamar Mem Beis Masaos from R’ Shimshon (not included in the English edition) but not the biography or the other Pesach related expositions.

In Short: 1) This Maamar will give you an entirely new angle to the Makkos and a more meaningful Pesach. 2) It is accompanied by a powerful assurance of health, honor and prosperity that all the Gedolim, Sephardic, Ashkenazic and Chassidic from after R’ Shimshon’s time until today valued greatly, associating great miracles to it.