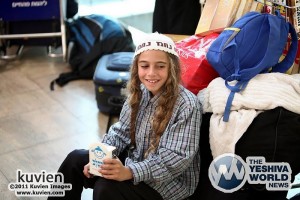 Thousands of people flock to the departure lounge of Ben Gurion International Airport as they make their way to Uman for Rosh Hashanah this week. Some are flying with their whole families, many people are going solo, and a few people are coming up with unique ways to get themselves there. All said and done, one can feel the simcha in the air as one walks through the security line, where the overt display of achdus is becoming of the days preceding Rosh Hashanah. Due to proper prior planning and organization, the borderline insane hub-hub of previous years is somewhat more orderly as meeting points have been appointed for minyanim and luggage flow and weighing has been streamlined.

The focus of the essay this year are some of the stories of people at the airport who are still trying to get to Uman – be it by collecting money for a ticket by the entrance to the airport or taking more extreme measures such as attempting to circumvent passport control whilst barred from leaving the country.\

Credits: Kuvien Images (with some footage by Feivel Katz) – www.kuvienimages.com

To watch this video from a mobile device, click HERE.