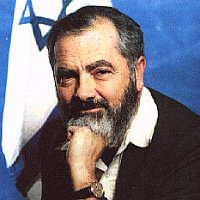 Ariel Zilber was a leading name in Israel’s performance industry until he became frum and right-wing that is. For a performer’s point of view he has paid a heavy price, attacked by his ‘fellow artists’ and frequently banned or boycotted by the left-wing entertainment industry.

That said, Zilber is not lamenting his move to yiddishkheit, and he uses every opportunity he can to spread the word, the words of adherence to Torah and Mitzvos as well as the importance of realizing the kedusha of Eretz Yisrael.

In a message released by Zilber, one already labeled “not politically correct” by many, he states that now, he is more convinced than ever that “Kahane was right”, so much so that this is the name of his latest album, “Politically Correct”.

Coinciding with the 21st yahrzeit of Rabbi Meir Kahane HY”D, Zilber released his album which contained a song to the late rabbi and MK. He unabashedly tells people “buy only from Jews” and “only hire Jews”, statements that are not overly popular among his previous followers in Tel Aviv and elsewhere.

He begins the video with Kahane’s nemesis, MK Dr. Ahmed Tibi, telling the media the words and tune for the song “came to me”.