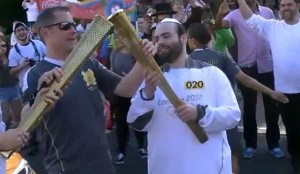 London’s 22-year-old Ephraim Goldstein, a member of the local chareidi community put on the white Olympic uniform and ran with the Olympic torch as it passed through the area ahead of the opening of the London Olympic Games. Goldstein was selected because of his acts of chessed, citing that by the age of 16 he was already operating 16 tzedaka endeavors and today he oversees 300 people involved in different chessed projects, namely the Shomrim and other organizations assisting the ill, infirmed and needy.

He wore the uniform of those who carry the torch along with a white yarmulke with the Olympic seal on it.