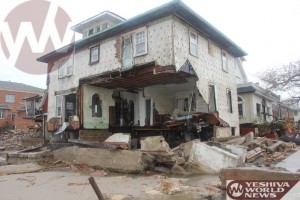 These photos will give the readers a view of the destruction in the Sea Gate area of Brooklyn. Surrounded by water on three sides, the surge completely covered the gated community, home to many Frum families. Bichasdei Hashem, most people had evacuated, and were not in their homes when the storm tore through the area.

Although there were no injuries reported, the destruction is unimaginable, with many homes literally destroyed. Every home in the entire community suffered heavy water damage, as the storm surge covered the entire area.

Making matters worse, many streets are still under 4 feet of water with heavy debris cluttering the streets. This makes it impossible for homeowners to drive to their homes.

As we write this article, many people are arriving at their homes – staring in disbelief at the destruction before their eyes.