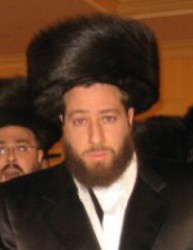 Yesterday Ezra Friedlander, the eldest son of the Lisker Rebbe, hosted a “TuB’Shvat Seuda” in his Boro Park home in honor of NYC Council Speaker Christine Quinn. The Speaker, who is Irish Catholic, seemed to enjoy herself joking “this is going to be a shock but I have never been to a Tu Bshvat seder before.” Several of those in attendance read psukim and other Jewish phrases in honor of the co-ed Tu B’shvat Seudah. Other elected officials in attendance included Councilman Brad Lander & Assemblyman David Weprin.

The Friedlanders were joined by a small crowd that included several community leaders such as Leon Goldenberg of Agudas Yisroel of America, Rabbi Yeruchim Silber of the Boro Park JCC, Sendy Rapaport of Masbia, Joshua Weinstein of Shema Koleinu and Yosef Rapaport of Hamodia. Leading the seder was Rabbi Steven Burg, formerly of the Orthodox Union, and currently an executive at the Simon Wiesenthal Center.

Please see below for a five minute highlight video of the event.