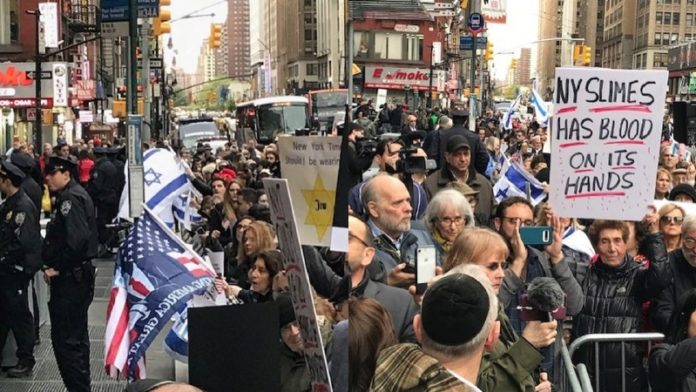 Several hundred people gathered on one day’s notice in Midtown Manhattan at The New York Times office building to send the publication a strong message: Jews will not tolerate the mainstreaming and globalization of antisemitic hatred in any form be it overt or disguised as cartoon social commentary.

The Times on Monday published a cartoon of Israeli Prime Minister Benjamin Netanyahu descending a mountain with a selfie-stick in one hand and a stone tablet with a Star of David in the other hand — just after saying it was “deeply sorry” for publishing a cartoon of Netanyahu as a dachshund (dog) wearing a Star of David collar and leading a blind and skullcap-wearing U.S. President Donald Trump.

Speakers included Dov Hikind, Professor Alan Dershowitz and radio talk show host Sid Rosenberg. Dershowitz suggested there was something deeply wrong with the “newspaper of record” which spends so much of its space every day attacking Israel, the Jewish State.

[Related: Why Jews (and others) Should Boycott the NY Times – An Editorial]

“Any time Israel defends itself, whether it’s on the borders of Gaza against Hamas, the borders of Lebanon against Hezbollah or along the Syrian border against Iran, the number one critic of the people of Israel defending themselves is, and has for the longest time been, The New York Times. Shame on them!

The Nazis were the radical Right and they were to blame then. What does the liberal far-Left New York Times have as an excuse in 2019? They have now joined Congresswomen Ilhan Omar and Rashida Tlaib in mainstreaming antisemitism in the ridiculous guise of anti-Zionism. The Times’ history of distorting the news about the Jewish people the world over continues in the present and seems to be going strong and unabated.

Let us not be surprised, then, when the next round of atrocities against Jews are overlooked and downplayed by the Times and others on the Left, while the Right continues to stamp out antisemites from amongst its ranks.

Shame, Shame, nothing but Shame on The New York Times and their kind!”

Huge crowd in front of the @nytimes building in NYC sending a clear message: ENOUGH IS ENOUGH! pic.twitter.com/xEuTs8tMgs

SILENCE IS DEADLY: Join me in loudly protesting against the @nytimes for publishing a vile antisemitic cartoon only days before a terror attack against Jews!

.@sidrosenberg spoke up for the Jewish people yesterday and we thank him. He joined @AlanDersh @HikindDov , Jeff Wiesenthal in front of #NYTimes . Why does antisemitism still exist? To see the video in full go to Our @bernieandsid Facebook page or Sid’s! pic.twitter.com/l3HWaY3E4Q 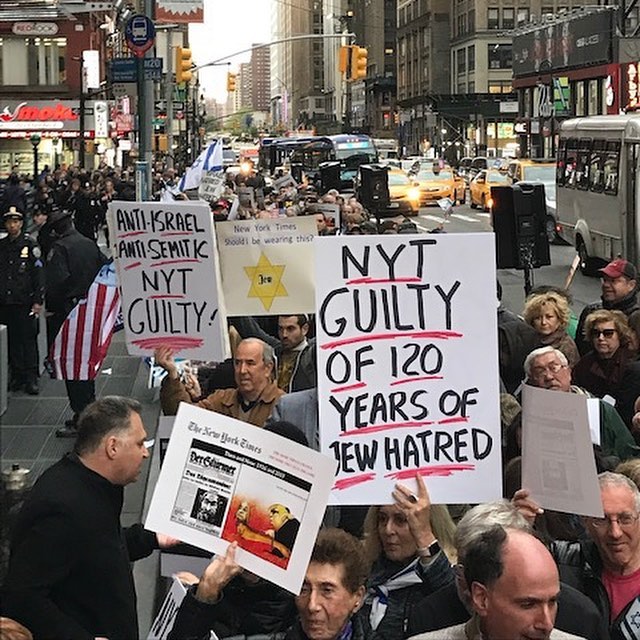 The @nytimes owes its readers more than an apology. We are to entitled to an investigation and explanation: how did the anti Semitic cartoon get published? Who approved it? What steps are being taken to prevent a recurrence? https://t.co/BXfA1iLt30

Speaking to the crowd of protestors tonight outside The NY Times building in midtown. Anti Semitic cartoons are not acceptable! Enough is enough. Never again! #Sidizens

The New York Times has apologized for the terrible Anti-Semitic Cartoon, but they haven’t apologized to me for this or all of the Fake and Corrupt news they print on a daily basis. They have reached the lowest level of “journalism,” and certainly a low point in @nytimes history!

In case you are wondering what the @nytimes (antisemitic) cartoon (which replaced another antisemitic cartoon) is supposed to mean.

Here is the original cartoon from the same cartoonist before it was ’sanitised’ for the @nytimes.

Bibi is supposed to be Moses.

Even if unintentional, the left has normalized anti-semitism under the guise of criticizing US-Israel foreign policy. It is radicalizing people.

NYT was latest example along with their weak-at-best apology. pic.twitter.com/dPctp2OrQ8