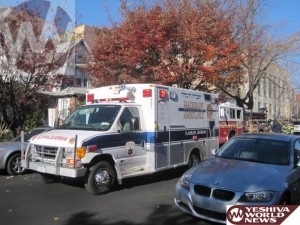 A suspicious odor prompted dozens of emergency personnel from the FDNY, NYPD, and Flatbush Hatzolah to be dispatched to the East Midwood Hebrew Day School on Wednesday morning.

Sources tell YWN that some children suddenly fell ill, and a strange odor filled the the same area of the school. Hatzolah and 911 services were called, and the FDNY and the NYPD did a thorough search of the school building, which is located on East 21st Street between Avenue’s K and L. It was soon determined that a cleaning liquid being used in the school caused irritation to some students, and posed no danger to the children.

Two children were taken to the hospital by Flatbush Hatzolah for evaluation, and were reportedly in stable condition.