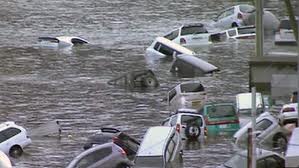 We thought we’d seen the worst a few weeks ago, but no. The clips below look like a flood turning into rapids transforming into a roaring river. This looks more like what it actually was – an honest-to-goodness ocean spilling into a city and swallowing it whole. By the end of the first video (embedded below), if not for that lone building on the right edge of the frame, you wouldn’t know civilization had been there.

The official death toll for the great quake-tsunami has risen to 10,901 – up from 10,668 yesterday. The count of missing persons, which had been falling for the past two days as the identified dead reduced it, rose from 16,574 on Sunday to 17,649, an increase of nearly 1,100 people. Dead and missing together, ignoring the possibility of additional overlap of the lists (possibly as many as 5,000 of the collected dead are on the ‘missing’ list), now total 28,550… an appalling number that is sure to increase even further.

Even as the death toll numbers were inching upward (an earlier Monday report had it at 10,872), an aftershock initially measured at 6.5 resulted in a tsunami warning. Later downgraded to 6.1, with the tsunami warning rescinded, the quake and tsunami warning reignited the fear, and rekindled the still fresh embers of loss and sorrow in the survivors of the “great quake-tsunami.”

It will be long and long before every temblor, every siren and every sight of the aftermath of the great quake-tsunami does not send many of the survivors back to that day. The government walks a tightrope here, between the need to warn and the need to be sensitive to the survivors’ pain.