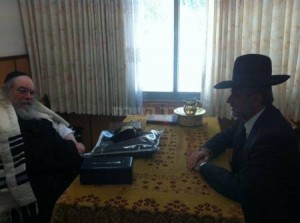 Shas leader Deputy Prime Minister/Minister of the Interior Eli Yishai arrived at the rebbe’s vacation location in Telshe Stone to personally deliver the invitation from Chacham Ovadia, asking him to honor the primarily Sephardi siyum with his presence.

Reports indicate that the rebbe told R’ Yishai that he will do his utmost to participate.

The rebbe reportedly gave Yishai a chizuk towards continued steadfastness in his dealings with efforts to draft avreichim, praising his actions to protect the yeshiva velt, giving him the bracha לך בכוחך זה והמשך להצליח.

The rebbe asked R’ Yishai to personally thank Chacham Ovadia for the invitation on his behalf.