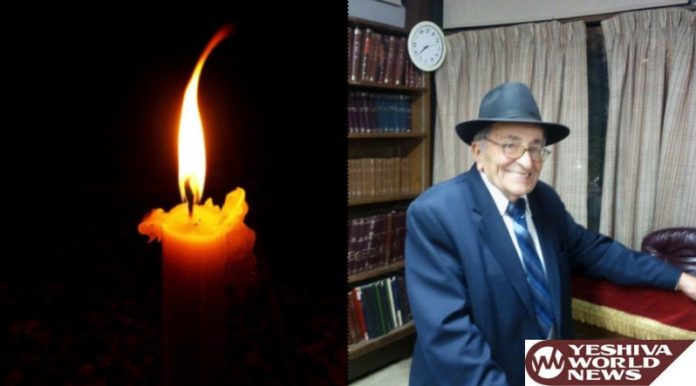 YWN regrets to inform you of the petira of Rabbi Raphael Pelcovitz zt”l, the longtime Rov at the White Shul in Far Rockaway, NY. He was 97.

The levayah will be held today, Wednesday, March 14th at 1:00PM at the White Shul, 728 Empire Avenue, Far Rockaway.

Kevurah will be on Har Hamenuchos on Thursday, March 15th. It is estimated that the levayah in Israel will take place at 2:00 pm. This time is subject to change.

Shivah will be observed at the Pelcovitz home, 781 Caffrey Avenue, Far Rockaway, through Tuesday morning (March 20). Ethel Gottlieb will begin sitting shivah at the home on Wednesday evening; the other family members will return Friday morning (March 16). Minyanim details TBA/

The following was written by Rabbi Yair Hoffman for the Five Towns Jewish Times:

He was the dean of the Orthodox American Rabbinate. A graduate of Yeshiva Torah VaDaas, and a Talmid of Rav Shlomo Heiman zt”l, he served as the Rav of the White Shul in Far Rockaway for decades. He lived in the Far Rockaway community for six decades. The Torah community mourns the loss of a remarkable Rav – Rabbi Rephoel Pelcovitz z”l.

Rabbi Pelcovitz loved people. He loved his congregants. He loved people that he encountered on a day to day basis.  He was a great Talmid Chachom. He was an author.  He was a translator. His translation of the Seforno is truly a Torah classic and will remain thus for centuries to come. The footnotes in this translation demonstrate his profound erudition and understanding.

Rav Pelcovitz prompted people to think and to re-examine aspects of their lives.  He had a warm infectious smile which helped in this task of his. He was also an accomplished speaker with remarkable content.

I was privileged to see his remarkable Shabbos parsha notes. The published sefer of his drashos are only a small part of it. The unpublished notes are a treasure trove for any Rav.

Rav Pelcovitz always had a tell-it-like-it-is style. I sat with Rav Pelcovitz to hear what he had to say on contemporary Jewish society.  He felt that we are not emphasizing the role of Eretz Yisroel in our Yiddishkeit and our need to support it even more.  He was very saddened that Torah Jews are not taking a greater role in helping combat the BDS movement, for example.  Below are some more of his thoughts:

Rabbonim should increase how they address the area of the Ben Odom lechaveiro.  Who is a frum Jew?  How do you define and how does one reach a point where he is entitled to the title that he is a religious frum pious person?  What are the yardsticks?  The current yardsticks re skewed, wrong or incomplete.  When a secular person asks how could a religious Jew be so unethical, so immoral?  Is it not important to teach ourselves that the simplest answer to that question is that it is wrong.  He is not entitled to that title as a frum Jew.  Keeping Kashrus, tzitzis and Shabbos does not entitle him to be called a religious Jew if in fact he is dishonest or immoral.

The Yeshivos and Bais Yaakovs and other schools – Are the Yeshiva Gedolos today teaching derech eretz to their students?  Can you tell, looking at a young man or woman in public, whether he or she is a Talmid of a seminary or a Bais Yaakov or could he just as well be a student of any college or secular high school?  I have noticed that too many of these young people, especially the boys, lack simple basic fundamental behavior of derech eretz.

Derech eretz to an older person, to a teacher or a Rav and to their companions – their chaveirim.  Some claim that because we live in a relatively affluent society – one of entitlement – where the average youngster has never really been confronted with any kind of challenge when it comes to their lifestyle.. They have never gone hungry been denied a new suit or dress.  They enjoy many of the luxuries which they do not even consider luxuries.. Has this spoiled them and affected their personalities and character?  Are parents sensitive to this lack in their children?  If so, might it be that they themselves are insensitive in this area.  Is the kavod that a student once had for a teacher, fifty years ago or 100 years ago in Europe or in this country – is that still operative today?  It would be interesting to ask this of many Rabbonim and teachers and compare it with what old-timers would say.

ON THE ROLE OF THE JEWISH PEOPLE

The Jewish people was always a curious people.  They were always involved in the world.  We were never, in my humble opinion, although in some ways always isolated, because we are different – hain am levado yishkan was always part of the description of the Jewish people.. We never closed ourselves off from the world. We never built a wall between ourselves and the world where we shut ourselves off from knowing what is going on in the world and selecting things that could be instructive and could broaden our horizons.  Vegam es haolam nasan belibo – The concealed is in the heart of man, but the ksiv kri of this posuk is the knowing what is in the world the inquisitiveness was always there.  Especially the litvishe yeshivas – the origin and mother of all yeshivas and which kept alive the yeshiva movement for the past two hundred years..

Historically, the yeshiva movement was always interested in the world.  They wanted to know history, the culture of the world.. The abysmal am-haratzus of the world around us did not exist.  Today the more you are involved in the yeshivish community it is almost like a badge of honor that you do not know what is going on in the world..

We have become very insular.  I have seen hundreds of people of children attending yeshivas who are appalled by the isolation and ignorance of their own children… If we are living in this place in this century in this time it is extremely important.  Not of copying or becoming like them but at least to understand and to know and to have a broadening of knowledge of the culture of the world around us.

Rav Pelcovitz z”l built Torah in the Far Rockaway/Five Towns community.  Under his aegis the shul grew to be one of the largest shuls in New York.  He served as a role model for Rabbonim across the country.  Yehei Zichro Boruch.