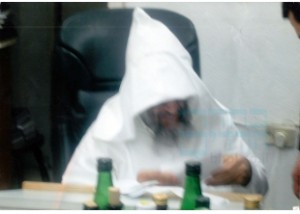 5:58PM EST: [UPDATES IN EXTENDED ARTICLE] YWN has confirmed that Rav Elazar Abuchatzeira of Be’er Sheva was just Niftar after being stabbed multiple times. United Hatzalah was first on the scene and tell YWN that they found him to be in traumatic arrest, he was pronounced dead a few minutes later.

According to initial reports, someone went into his room during the time when he gave people Brachos, and the man stabbed him multiple times. According to our sources, the man has been arrrested. Some sources say that the attacker was well-known in the ‘inner-circle’ of the home. That has not been confirmed by YWN.

Rav Elazar was the grandson of the Baba Sali ZATZAL, and was known as the “Baba Elazar”. He was the son of Baba Meir Abuchatzeira. He was known for his Shmiras Einayim, and always had his face covered with the “Glima”. He also was very against any photos taken of him, and therefore there are not many available.

His brothers are Rav Dovid Abuchatzeira Shlita of Nahariya, Rav Yekusiel, Rav Refoel from Ashdod, and Rav Yehosua Rachamim. His sister is married to Rav Chaim Pinto, the Rov of Ashdod and Kiryat Malachi.

He was reportedly 62 years old.

Levaya details will be published when they are available to us.

UPDATE 7:40PM EST: Police have arrested Asher Dahan as the suspected killer. He was reportedly apprehended by family members in the seconds following the murder. Interior Minister Eli Yishai is reportedly at the hospital, and ZAKA announced that police will not do any autopsy.

UPDATE 8:03PM EST: Hagon Chacham Ovadia Yosef Shlita broke down in tears upon hearing the terrible news, and asked for a phone to talk to the family, Kikar reports. He Paskened that the Levaya can take place after Chatzos on Friday.

The Levaya will start in Be’er Sheva, and then proceed to Yeshiva Porat Yosef in Yerushalayim, followed by the Kevura on Har Hazeisim, next to the Kever of his father.