Yesterday, I got home from school a little earlier than usual. I sat down at my desk and opened my laptop. I was going to check the news on several sites that I read, and then I was to get back to working on my apps. I logged on to Cnet, and there was a banner on top of screen. “Apple Founder, Steve Jobs dead. Story to follow.” [sic] My chipper mood quickly faded away. I didn’t write any code that night. I spent the time following the technology world as they mourned the passing of someone who has been compared to Edison and Einstein. Steve Jobs, designer, inventor and innovator has died.

As a developer of several apps (including YWN Radio for iPhone and iPad), I suppose I have a greater feeling of connection to Steve than many other frum people. I spent a lot of time working with things he was directly involved in building. Much of the way I think about my profession has been influenced by him. That said, I think that his passing matters and should matter to every frum Jew. For those that say that this is not something for frum people to be concerned with, allow me explain why I think that is wrong.

Technology is a very tricky subject in hashkafa, because of all of its power. I’m not going to use any clichés here, as they’ve been exhausted.  To put it simply: as frum Jews, technology avails things we must avoid. That Steve Jobs devoted his life to progressing great technology is not a reason to call him “a rasha”, and neither is his personal life. There are several reasons that I feel that this assertion is true.

First of all, human nature is to view others through the lens of self. I imagine that many people may have asked themselves at one point or another if he was Jewish. It’s a perfectly natural question for a yid to ask, but the answer is that he wasn’t. From his perspective, he had no obligation to any Torah values. This man literally was a tinok shenishba. (Granted, his biological parents weren’t necessarily Jewish either, but that’s not the point here. The point is that his family situation contributed to the development of his outlook, which is how he ended up where he did.)

From a more general perspective, I feel that as we approach the Yom HaDin, it is imperative that we remember that we are all being judged by Hakadosh Baruch Hu. Judging others will surely put us in a bad light, r”l.

Once on the topic of teshuva, I am reminded of the directive from chazal to do teshuva every day, because it might be your last. Not to equate Steve Jobs with chazal, lehavdil, but there is a striking similarity between that memra and a commencement address that Mr. Jobs gave at Stanford University in 2005. In that speech, he mentioned his first bout with cancer, and how he learned to live with idea that we don’t know how long our life will be. He essentially quoted that chazal, without realizing it.

Steve Jobs’ innovations have enabled many people to do many great things for the frum world. To name a few of the more recent ones: YWN Radio for iPhone, iPad and iPod touch. Siddur, by RustyBrick, as well as several of my own apps, are potentially tremendous resources from frum Jews around the world. I am really excited about some of the things that I’m working on specifically for the frum community. Those projects which I’m working on revolve around yiddishkeit and the work of Steve Jobs and co.

I feel that Hashem sent a tremendously talented individual to help bolster the frum community. That person is now gone. Even one of the wealthiest and most poweful people in the world goes when HaKadosh Baruch Hu decides that their time is up.  Someone, with whom I was discussing Steve’s death, related the following to me:   When a relative of his died of cancer, he had thought that it was because they couldn’t afford advanced medicine or some ‘magical research’ that would cure them. Wealthy people, he thought, didn’t have that problem. He now realizes that this is not the case. It’s a tremendous lesson that we are being taught right before the gmar din. We need to recognized that and move forward with that in mind.

I reached out to several other frum developers and asked them to share their feelings on Steve’s passing. Alan Rosenbaum of Davka Corperation told me about Steve, that “his work has directly impacted the products and directions that we have taken in our software development, dating from the days of the Apple II in the 1980’s to the iPhones and iPads of today.” Barry Schwartz of RustyBrick, publisher of many Jewish iOS apps, had this to say: “RustyBrick is sadden by the loss of Steve Jobs, his vision for Apple has lead us to build software that aids the Jewish community in observance and education of orthodox Jewish customs. […] Jobs has played a significant role in how many Jews observe their day to day religion.”

Wishing everyone a g’mar chasima tova. 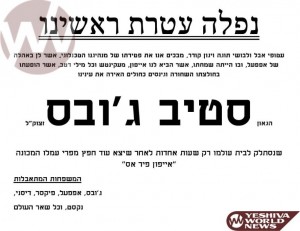