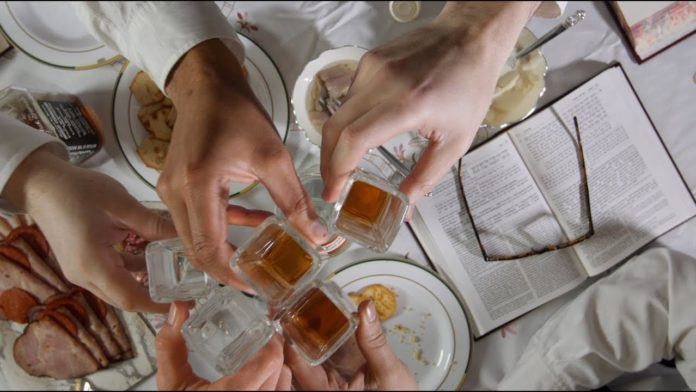 Just one week ago I shared with you my thoughts on the excessive drinking that I personally witnessed in Eretz Yisroel over Succos, with all too many young men and women misguidedly transforming what should have been an uplifting yom tov into an
excuse to get completely and totally plastered. If what I saw had only been limited to Succos in Eretz Yisroel it would be bad enough, but we all know that that isn’t the case, and the comments and feedback that I have gotten in recent days further prove the point that this happens year round in every Jewish community.

People often come up to me and accuse me of exaggerating the problem, so let me share with you an email that I got from Zalman Cohen, a fellow Hatzolah member from Miami.

I’m sure you remember that I told you that you were being overly dramatic when youreleased your Kiddush Club video before Purim, portraying the problem far worse than it actually was. Sure, guys will have a drink or two or even three, but the idea that that anyone was getting totally wasted on a regular basis, or that kids copying what they saw would become addicted to alcohol? Sorry, I wasn’t buying it.

Living in Miami I go on plenty of calls involving people who partied to excess. People come down here for vacation and frequently overdo it, sometimes with disastrous and even fatal results. But after attending a kiddush in a mainstream yeshiva community not too long ago I realized that your video was dead on, and that this is a problem that we need to address now.

I was spending Shabbos quite by accident in this particular community and joined my hosts at a magnificent sit down bar mitzvah kiddush with over 150 people in attendance. As someone who enjoys a geshmake cholent or a really fine cut of meat, I can appreciate that there are those who might want to enhance their simcha with some top tier booze.   But what I saw here was so over the top that it left me speechless.

There must have been between $3,000 to $4,000 dollar’s worth of high end schnapps on the tables, more than I have ever seen at any simcha. The liquor flowed freely, with the adults egging each other on to have another glass or two, and while no one was actually handing out hard liquor to the kids, no one was stopping them either and many were drinking seriously.

But that was just the tip of the iceberg, because someone walked in holding a black bag filled with marijuana candies. There were lollipops and other goodies being passed around the room and while I didn’t see anyone actually giving marijuana candy to the kids, I did see one who was holding the bag at one point. Worse yet, from the moment the kiddush started until the very last guest left, I saw zero adult supervision – not on the liquor and not on the candies. The kids were literally free to have as much as anything they wanted, something I found to be extremely disturbing.

To be honest, I wouldn’t have believed that this could happen in a prominent Torah community if I hadn’t seen it with my own eyes. I went back to my host’s home for the Shabbos seuda and halfway through the meal a Hatzolah call came in on my host’s radio about someone who had been at that kiddush who needed immediate medical attention.

You don’t have to be a rocket scientist to see the obvious lessons here.

Kids pick up on things, more than we think they do. When alcohol comes in gorgeous bottles, is served in beautiful glasses and showcased so that it becomes a status symbol, we send messages to our kids that drinking makes you cool, which can have devastating results. People need to know that before they pour a drink in front of their kid, they need to think about the long term lessons they might be teaching them.

Living in South Florida, I have met too many people who come here to be near a lovedone undergoing rehab. I have family members calling me, crying their hearts out and it pains me to no end to see what they are going through. We need to reach out to our young people and stop this problem before it starts because far too many lives have already been ruined.

I wish I could tell you that Zalman’s story was fiction, one that was made up to illustrate a point, but I can’t. Because this really happened. How have we come to a point that our kiddeishim are nothing more than giant booze fests? When did it become okay to bring recreational marijuana into our lives, or worse yet, into our shuls? Have we forgotten that the word “kiddush” has its roots in the word “kedusha?” Have we forgotten what holiness and sanctity are all about? Is this how we enhance our Shabbos – by getting bombed and high?

Something is very, very wrong in our lives if things like this can be occurring within our midst with nary a complaint nor an outcry surfacing from anyone. We need to either take a strong stance against this madness, or be prepared to suffer the heartbreaking consequences, which I can assure you will destroy lives.

I know which side I am on.

Zvi Gluck is the director of Amudim, an organization dedicated to helping abuse victims and those suffering with addiction within the Jewish community and has been heavily involved in crisis intervention and management for the past 19 years.  For more information go to www.amudim.org.