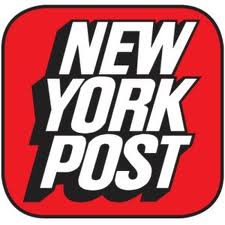 There is no question that as a society we are rapidly experiencing a severe moral degeneration, the likes of which this country has never seen in years past.

There is also no question that much of this decline is precipitated by the media. The “anything goes” editorial policies of two particular New York based newspapers both cater to and further feed the drive for immorality. The pages of these papers are filled to the brim with violence, pornographic depictions of the latest stars, and talk of how the next sports-figure or Hollywood actor has a serious drug problem. The reason for this all? Smut sells. Plain and simple.

These papers care not a whit for moral growth, for standards of decency, for the benevolent and fine nature of what once was America. They care only for their financial bottom line – and the triumvirate of violence, pornography, and the open talk of drug use has paved the way to financial success for these papers.

Yesterday’s New York Post was more than emblematic of the face of the moral degeneration of this paper. They attacked Bill DeBlasio, the New York City mayoral candidate for his words of comfort to a mourning Jewish community, who has just lost their leader. Bill DeBlasio says that Rav Ovadiah Yosef’s wisdom, charity and sensitivity were legendary, and the attacks begin. “Bill Loves Racist Rabbi” “Goy Vey” “What a P_ _ _!”

There is something deeply vile in speaking ill of the dead – particularly before the ink of the death notice gets a chance to dry. “De mortuis nihil nisi bonum – Of the dead, speak nothing unless good” was a motif even of the Spartans, and throughout the ages of the world’s history. Before this horrifying article, it was once thought of as a basic moral virtue.

There is something morally repugnant in speaking ill of another’s heroes. Thomas Jefferson owned slaves and even impregnated one. Washington and Ben Franklin owned them too, as did Lewis and Clark. Slave ownership is significantly worse than a seemingly racist line taken out of the context of a Saturday night lecture by individuals bent on casting this remarkable religious leader in the worst light possible. No matter, to the morally challenged editors of these papers they smugly self congratulate themselves for calling Rav Ovadiah a racist Rabbi – even though they would never dare paint or brush the founding fathers of this nation in such colors. 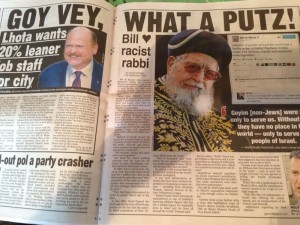 It is not that they are all bad even. It is perhaps a great irony that from a political perspective these papers always come out on the correct side of things when it comes to supporting Israel. But still, because of their moral challenges, we should not be so quick to shower them with profuse and bountiful Yasher Koach.

Last week these papers took the city’s Human Rights Commission to task for trying to challenge the propriety of Hasidic stores in Williamsburg posting a dress code. Within 6 hours of Agudath Israel issuing a very public and profuse thank you for the editorial, came the New York Post’s attack on one of Judaism’s leading sages. It was a vile and vicious attack that undermined one of the fundamentals of decent behavior.

Is there a lesson to be learned here? Perhaps we should not be bending over backwards to be thanking the morally challenged purveyors of smut, violence, and free-wheeling drug use. Such praise just might come back and bite us in the face.