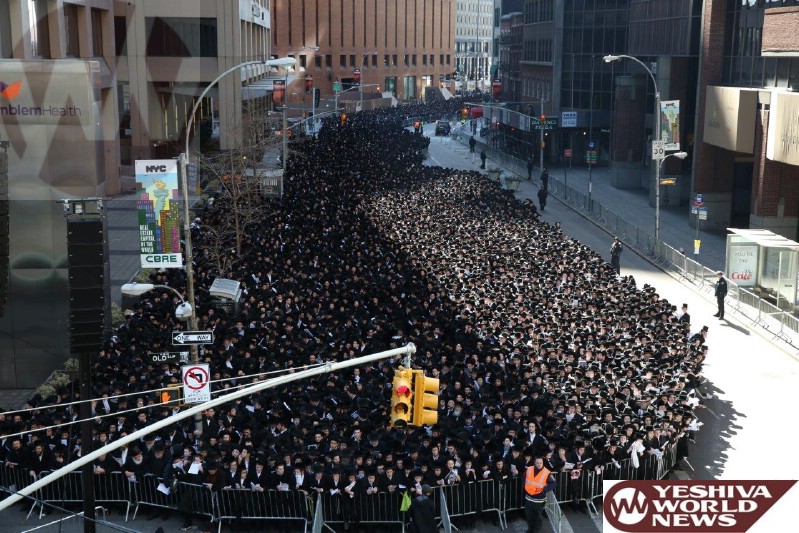 This is a response to my good friend Reb Barry Jacobson’s remarks on the Asifa this past Sunday in Manhattan. It also addresses his inquiry printed in the Five Towns Jewish Times about Torah sources regarding Bnei Torah continuing to study rather than serving in the army. There is no question, of course, that the soldiers who are protecting the nation against the enemies of the Jewish people are fulfilling a remarkable task and a holy role. Certainly, all of us who are beneficiaries of their bravery and dedication should express our sincere hakaras haTov and pray for their welfare and well-being.

The leading sages of America, Degel HaTorah, Agudah in Eretz Yisroel and the sages of Shas – the Sefardic Torah organization had all signed on for the call to join in the mass gathering in the Wall Street area. The mass gathering was to show solidarity with the Torah community in Israel that is facing the unprecedented law in the state of Israel’s history to draft Yeshiva students into the armed forces.

This response is an explanation and a historical overview about the confluence of army service and Torah study. Not everyone will agree with the explanations and positions set forth here. However, those that do not agree must realize that they do come from a very different socio-religious milieu than those in the Chareido world who have been brought up with and raised with a deep appreciation of Torah being the only definition of true life.

Serious-minded Chareidi Jews do not merely recite the words of the blessings of the Shma perfunctorily. No. When they recite the words, “Ki haim chayeinu – for they are our life – v’orech yameinu and the pathways of our life..” – they truly mean it.

The situation is somewhat analogous to the Manhattan Project during World War II. The top secret project that was to develop the atom bomb required an enormous amount of manpower – manpower that would normally have gone toward the war effort. The project was top secret and few understood what the Manhattan Project was all about, even the mass workers who were building centrifuges to build heavy water extraction plants. Workers and scientists who labored in the project were constantly subjected to sneers and snide remarks from the average citizenry – whose boys were across two oceans, the Atlantic and the Pacific, fighting.

The parallel is obvious. There was little appreciation for those who toiled at electro-magnetic isotope separation, thermal diffusion, U-235 production and Plutonium production, instead of going to the army. There is little appreciation as well for those who toil in Nashim, Nezikin, Kodshim and Moed, instead of fighting in the IDF. Bring the subject up to someone who was not raised in the bedrock of Torah life and you will invariably get the response, “Oh come on! They are so different!”

But there is no difference.

The Manhattan Project was crucial in saving hundreds of thousands of American lives. And, according to Chazal, full time Torah study is crucial in saving the Jewish people. But let’s take a quick tour through the historical record.

The Gemorah in Nedarim (32a) discusses the war of Avrohom Avinu with the four kings. The Gemorah asks why it was that Avrohom Avinu was punished with his descendants having to become exiled and enslaved. The Gemorah answers because he drafted Talmidei Chachomim. True, Shmuel provides a different reason – but the halacha still stands with the first explanation.

It was 1917, thirteen years after the arrival of Rav Avrohom Yitzchok Kook zt”l on the shores of Eretz Yisroel. The first World War had broken out and Rav Kook, the patriarch of the religious Zionist movement pleaded with the Chief Rabbi of England to try and rescind the decree of the drafting of Yeshiva students. The letter was written to Rabbi Dr. Joseph Hertz (of the famous Hertz Chumash) and is found in Iggeres HaRaya Vol. III p. 88 (#810). Rav Kook zatzal pleaded with Rabbi Dr. Hertz to use his good offices to try to spare the Yeshiva students. The plea was nearly identical with the pleas of the Chareidi spokespeople today.

Rabbi Shlomo Benizri in his Toraso Umnaso cites the Sichos HaRav Tzvi Yehudah Kook (Chapter One response 305) that although the Yeshivos that offer both learning and army service (Hesder Yeshivos) are necessary, “Hainan hashniyos b’erech b’madreigos rommemus haTorah – they are a second tier in the steps to the grandeur of Torah.” The first tier is comprised of the Torah-only Yeshivos.

Indeed, Rav Shlomo Zevin zatzal, whom Mr. Jacobson cites in his article, is also quoted in HaPardes (Vol 8 ’47 p. 8) that the Yeshivos represent a “lechatchila – an ideal” and he further writes (Tehillim 105), “Do not touch my anointed ones and in my prophets do no harm!”

No one is going to argue that when the geo-political situation is such that there is an imminent danger that all available people should go out to protect the nation. This was often the situation in the past as the war of 1948 demonstrated. But in current times, even the top IDF experts assert that there is no manpower shortage.

Another example: We need Hatzolah volunteers in our communities here in the greater New York metropolitan area. However, to institute a mandatory draft of EMT’s taking those draftees from other programs, at this point, is simply not warranted. It may not be politically correct to say so, but it is nonetheless true.

Will some disagree with the Manhattan Project analogy? The Rosh Yeshiva of Yeshiva Merkaz HaRav, the flagship Yeshiva of the religious Zionist movement, didn’t. Rav Shaul Israeli is quoted in the I Taives edition 5747 of HaTzofeh as saying, “A man who sits and studies Torah protects the world no less than a military army.”

What is missing in all this, however, is the realization that we are all children of the same mother and father. We are all parts of the same body and we should treat each other with the respect and love that we must have for our family members – even if we do disagree as to what approach should be emphasized or adopted. Recently, we have seen two conflicting PR Youtube videos to a song entitled “Anu Mashkimim v’haim Mashkimim.” The song explains how we awaken early for the right purposes, they awaken early for useless purposes. The song was used by both sides of the debate to denigrate the other side. Both uses of the song are wrong. We stand now in the month of Adar. The Manos HaLevi, Rav Shlomo Alkabetz, explains that the concept of Shalach Manos is to further brotherly love and ahavas Yisroel among ourselves. It is to counter the statement of Haman that the Jewish nation is Mefuzar and Mefurad throughout the nations because of their lack of unity. The month of Adar should counter the spirit of disunity and contribute to family love.

May Hashem speedily grant mutual respect and unity among us. Amain!