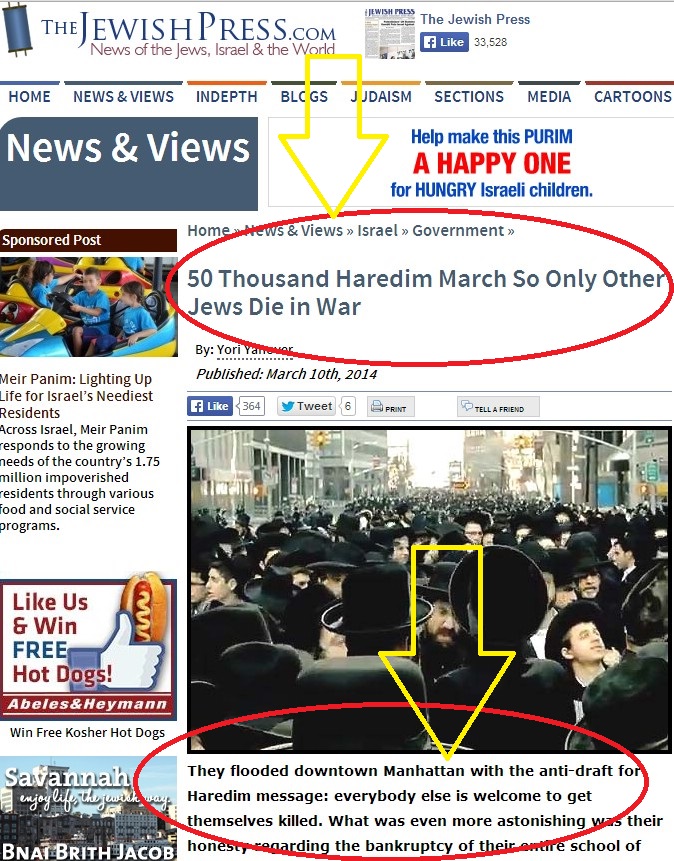 It was a headline befitting Der Sturmer Magazine, not the Jewish Press. “50,000 Chareidim March So Only Other Jews Die in War.” True, it was an op-ed by an individual, but nonetheless it was run in what is ostensibly a Torah newspaper.

Reading the tone and seeing the vitriol of this article one would have thought that the next line was “The Rabbis are our misfortune.”

The caption on the photo read, “They flooded downtown Manhattan with the anti-draft for Haredim message: everybody else is welcome to get themselves killed. What was even more astonishing was their honesty regarding the bankruptcy of their entire school of faith and study.”

The problem is that this is a complete falsehood and mischaracterization of what the Asifa was about.

The Asifa made no political message. No one was called an evil-doer. Signs were barred – yes barred. It was simply a public prayer session for the precarious state of affairs for Torah scholarship in Israel and to stand in solidarity with the Torah community in Israel who are in a state of anxiety as to their future.

The gathering was signed by the leading Rabbinic figures in this country as well as in Israel. Chassidic leaders, Ashkenazic leaders and Sephardic leaders all joined together in a cry for Torah study and scholarship.

Never before in the history of orthodox Jewish journalism has such a grievous breach of Rabbinic opinion ever been breached. Never before has the thoughts of so many sages been trampled upon with such hatred. Indeed, even leaders of the religious Zionist movement, whose children and students defend the borders of Israel called upon the Israeli government to stop this assault on the Yeshiva students.

Thankfully, the editors of the Jewish Press realized that the headline and the op-ed should come down. But this is not enough. The unprecedented attack on Torah and its leadership must not be allowed to hide temporarily so that it can rear its ugly head once again in the future. An apology should be issued immediately by the Jewish Press editorial staff. The author should be sent to sensitivity training and learn how to remove his anti-Torah biases and hates.

No one is asking the Jewish Press to change its mind about army service. The issue is Kavod HaTorah, or rather trampling upon it.