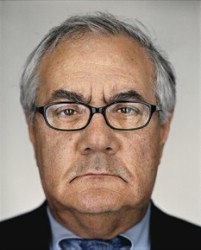 Boston, MA – Barney Frank, the irascible powerbroker who has survived scandal, repeated redistricting, and the ups and downs of the Democratic Party, today easily beat back his strongest challenge in years.

Frank defeated Sean Bielat, a little-known Marine Corps reservist who had waged a surprisingly energetic campaign that attracted national attention by attempting to blame the longtime congressman for mishandling the nation’s economic woes while serving as chairman of the House financial services committee.

At the Crowne Plaza Hotel in Newton, a couple of dozen Frank supporters mingled between a table of appetizers — a Chinese-Jewish hybrid of knishes, potato latkes, egg rolls, and chicken skewers — and a cash bar.