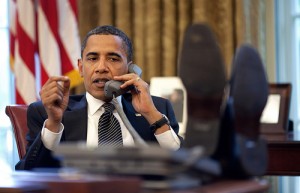 “The toughest thing over the last couple of days is seeing real terrific public servants not having the opportunity to serve anymore, at least in the short term,” he said at a press conference, praising allies’ “faith” and “conviction” on votes in support of his agenda. “There is not only sadness about seeing them go, but there’s also a lot of questioning on my part, in terms of, could I have done something differently or done something more so that those folks would still be here.”

Obama also said that all presidents should go through the process of getting outside of the White House bubble to connect with Americans.

“That’s not something that I’m recommending to future American presidents, that they take a shellacking like I did last night,” he joked.