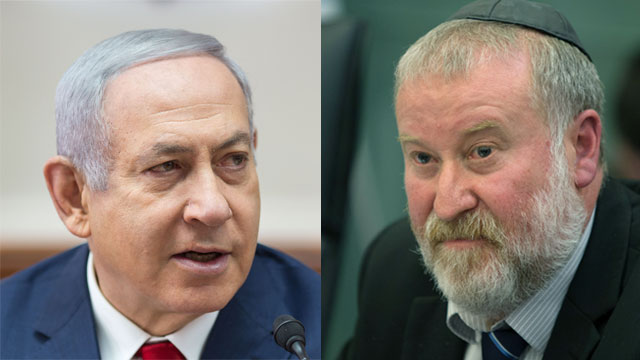 Attorney General Avichai Mandelblit charged Netanyahu with fraud, breach of trust and accepting bribes in three different scandals. It is the first time a sitting Israeli prime minister has been charged with a crime. Mandelblit was set to issue a formal statement later Thursday.

Allegations against Netanyahu include suspicions he accepted hundreds of thousands of dollars of champagne and cigars from billionaire friends, offered to trade favors with a newspaper publisher and used his influence to help a wealthy telecom magnate in exchange for favorable coverage on a popular news site.

Netanyahu scheduled a press conference at 8:30 p.m., an hour after Mandelblit’s expected announcement.

The indictment does not require Netanyahu to resign but is expected to raise pressure on him to step down.

Netanyahu has called the allegations part of a witch hunt, lashing out against the media, police, prosecutors and the justice system.

Netanyahu was scheduled to issue a statement later Thursday.

The decision comes at a tumultuous time for the country. After an inconclusive election in September, both Netanyahu and his chief rival, Benny Gantz, have failed to form a majority coalition in parliament. It is the first time in the nation’s history that that has happened.

The country now enters an unprecedented 21-day period in which any member of parliament can try to rally a 61-member majority to become prime minister. If that fails, new elections would be triggered.

President Reuven Rivlin formally informed parliament of the deadlock on Thursday, a day after Gantz’s window for forming a government expired. He called it a “miserable political situation” and pleaded with lawmakers to find a compromise.

Netanyahu is desperate to remain in office. Under Israeli law, a sitting prime minister is not required to resign if charged with a crime. All other public officials must immediately step down.

Likud leaders have so far remained solidly behind him.

But in the first sign of rebellion, Netanyah’s top Likud rival called for a leadership primary should the country, as expected, go to new elections.

Gideon Saar, a former senior Cabinet minister, said he supports the establishment of a unity government with Gantz’s Blue and White Party to avert another election. He said he would be a better fit than Netanyahu.

The only plausible way out of a third election — and the prolonged political paralysis that has gripped Israel for the past year — would be a unity government.

Blue and White edged Likud by one seat in the previous election and together they could control a parliamentary majority. Both Netanyahu and Gantz have expressed an overall openness to the concept but during weeks of talks they could not agree on the terms of a power-sharing agreement, including who would serve first as prime minister.

Netanyahu has refused to drop his alliance with smaller nationalist and ultra-Orthodox Jewish parties, which was a non-starter for kingmaker politician Avigdor Lieberman.

But the main sticking point has revolved around Netanyahu himself.

The long-time Israeli leader is desperate to remain in office as he prepares for the expected indictment. Gantz’s Blue and White refuses to sit under Netanyahu while he faces such serious legal problems but has said it has no problem with Likud if he is removed from the equation.

The emergence of Saar as an heir could reshuffle the deck, but challenging Netanyahu in Likud is a risky maneuver in a party that fiercely values loyalty and has had only four leaders in its 70-plus-year history.

A former lawyer and journalist, Saar was first brought into politics 20 years ago by Netanyahu, who made him his Cabinet secretary during his first term in office. Saar then established himself as a staunch nationalist who opposed Israel’s 2005 withdrawal from the Gaza Strip and resisted the prospect of a Palestinian state. He quickly rose in the Likud ranks, twice finishing first in internal elections for its parliamentary list and enjoying successful stints as education minister and interior minister after Netanyahu returned to power in 2009.

But as with others in Likud who saw their popularity rise, he too began to be perceived by Netanyahu as a threat. He quit politics in 2014 to spend more time with his new wife, Israeli TV anchor Geula Even, and their young children, before making his comeback this year.

Despite his hard-line positions, Saar is liked and respected across the political spectrum and could prove a far more comfortable partner for unity with Gantz if elected head of Likud.

WATCH: 12 Yrs. After It Was Written: Pollard Brings His Sefer...