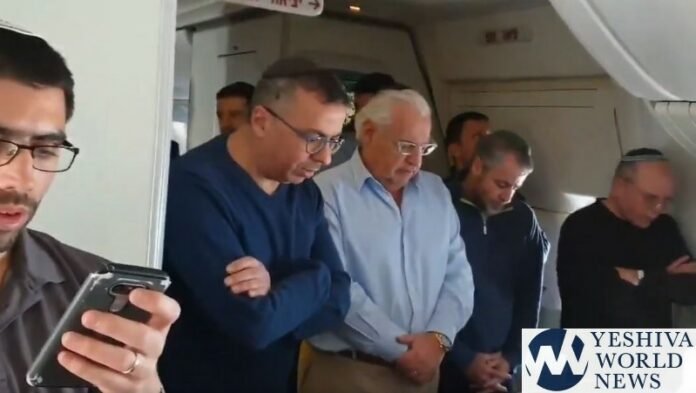 As Prime Minister Binyamin Netanyahu flew to the United States on Sunday for the unveiling of Trump’s “Deal of the Century,” frum political figures and journalists formed a minyan to daven Maariv, making sure to include a tefillah for Middle Eastern peace.

The minyan included US Ambassador to Israel David Friedman, head of the National Security Council Meir Ben-Shabbat, military secretary Avi Blot, journalists and other frum people on the flight.

Meanwhile, Palestinian Prime Minister Mohammad Shtayyeh on Monday denounced the long-anticipated Trump administration peace proposal ahead of its unveiling this week, saying it “doesn’t constitute a basis for resolving the conflict.”

Shtayyeh said the plan violates international law and “comes from a party that has lost its credibility to be an honest broker in a serious and genuine political process.”

The Palestinians have not yet seen the plan but have already rejected it, saying the Trump administration is biased in support of the Israelis.

A Palestinian official said that President Mahmoud Abbas has rejected overtures from mediators in recent weeks to arrange a phone call with Trump. The official spoke on condition of anonymity because he was discussing a classified diplomatic issue.

Trump and Netanyahu are slated to meet Tuesday to discuss the much-vaunted “Deal of the Century.” The White House invited the Israeli prime minister and his main opponent, Blue and White party leader Benny Gantz, to Washington on Monday to announce the plan just weeks before Israel’s third parliamentary election in under a year.