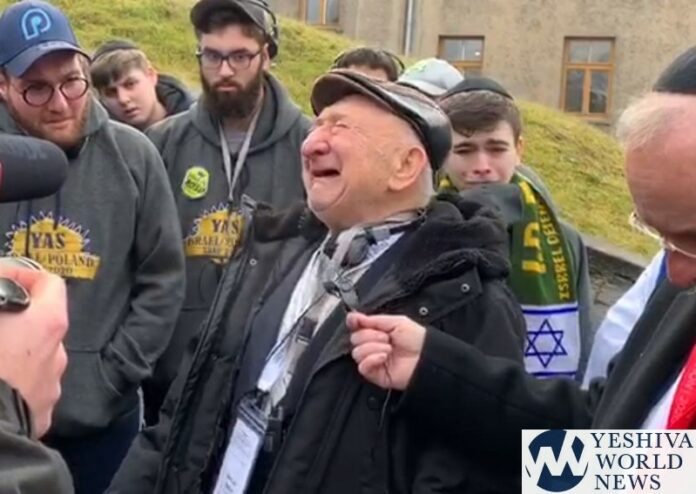 In a moving scene by Auschwitz, an English-speaking Holocaust survivor told his story, surrounded by a group of 25 boys from Ateres Shimon from Far Rockaway.

Rabbi Shmuel Beller, 92, grew up in the Polish town of Oświęcim which later became the most notorious concentration camp associated with the Holocaust – Auschwitz.

Emotional, with his voice choked as tears streamed down his face, R’ Beller screamed “Unbelievable what the murderers, these Germans Yemach Shemam did! Where was Roosevelt, President Roosevelt Yemach Sememo?! He could of saved alot of Jews!

R’ Beller was 12 when World War II began and spent five years being transported to ghettos and labor camps until he was sent to a concentration camp at the end of the war. He survived the camp, endured a death march, and was ultimately liberated but ironically almost didn’t survive eating solid food after being liberated. He became critically ill and was hospitalized for three months.

WATCH THESE EMOTIONAL CLIPS BELOW

Rabbi Beller has previously said that after the war he was no longer religious, but the Klausenberger Rebbe drew him close and influenced him to become religious again.

Rabbi Beller gradually realized he was the only survivor of his family. He eventually discovered five surviving friends from his home town, adding that none of his friends were still religious and it was a miracle that he became religious.