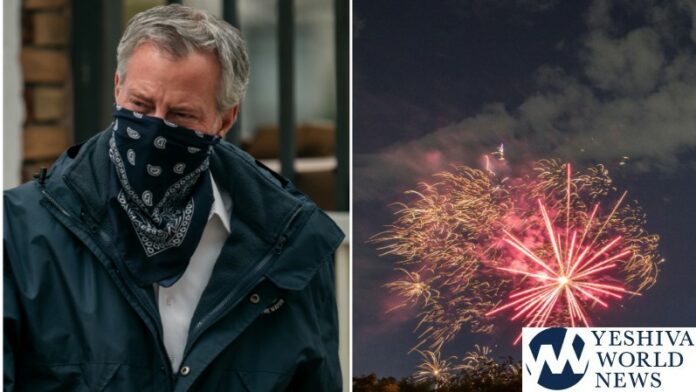 The following is the back and forth between NYC Myor DeBlasio and reporters regarding the out-of-control fireworks plaguing NYC the past few weeks. Most note-worthy is the Mayor’s response to Veteran Hamodia reporter Reuvain Borchardt.

Question from Julia of the NY Post: So first on the fireworks, I understand the importance of, of cutting off the supply at the root, but are police going to do anything to go out and potentially, maybe confiscate fireworks from those who are, are setting them off in neighborhoods and really causing the disruption and the danger to New Yorkers every night?

Mayor: So, Julia, I’d say a couple of things. The most important thing is for the NYPD to work on the most important issues and right now, given the other challenges we’re facing, I want them focused on the most fundamental issues of public safety. So, I’m concerned first and foremost about addressing the shootings problem we’re having. That’s where the central focus of the NYPD needs to be on reducing that violence and they’re making very important moves to address that. The fireworks can be unsafe. I’m not for a moment missing that, but the challenge a lot of times with fireworks is that particularly young people fire them off and then leave immediately; so it’s very hard to find them and address it in real time, in a way that actually would make a difference. But anytime NYPD has the ability to intervene, whether it might be a threat to human life, of course they will. We take that very, very seriously and have to. I think the more profound issue is going to be going to the root cause, just cutting off the supply and the city has had some success in the past and we’re going to go very hard at that. And I do think the education efforts are going to make a difference. I think a lot of young people have to be reminded of the dangers. I think a lot of parents and family members have to be reminded of the dangers and start talking to their young people and I think that will, that will affect a lot of the reality as well.

Question by Veteran Hamodia reporter Reuvain Borchardt: Good morning, Mr. Mayor. Based on your comments of cracking down on the suppliers of fireworks and your response to Julia that you really don’t want the NYPD doing anything to reduce fireworks use, it seems still that if the police come across someone using it, they’re not supposed to do anything. There’ve been videos of cop cars driving by, as kids were shooting fireworks at each other, they haven’t done anything. There’s a sense that you’re unwilling to use the police to vigorously enforce the law and that the quality of life of law-abiding New Yorkers is less important than the idea of using police as little as possible. So, I’d just like to ask plain and simple, if New Yorkers see illegal fireworks, should they call 9-1-1? And if police see people shooting them off, should they arrest them? Are police being instructed to stop this or to let it go?

Mayor: Okay, Reuvain, respectfully, you can editorialize all day long in your question. I don’t think the best way to get at the truth is to simply present a worldview and act like that’s the way things are being interpreted. What you said is not consistent with what I said, with all due respect. What I said was we have a situation where if anything is a matter of life and death, you know, of course the NYPD is going to intervene. But if you listened to what I said just a short while ago, we have a situation where a lot of the times kids set off fireworks and leave immediately. It’s very hard to do effective enforcement. And we have a lot of other serious things the NYPD needs to focus on right now. If anyone hears fireworks and they want to complain about it, they should call 3-1-1. Absolutely. If they think something is an immediate matter of life and death, as always, call 9-1-1. I don’t accept this frame of, like, you have a video of one thing that happened and that means everything is the same way. No, I just don’t buy that. If any NYPD officer thinks that something needs to be intervened and that’s part of their professional discretion to make that decision. But the focus right now is on dealing with serious and violent crime. That’s where we need NYPD resources focused.

Question: Again, you said life and death, but I’m asking is quality of life not enough for a police officer to intervene? Is it only if it’s life and death?

Mayor: No. Again, what I said is – Reuvain, you can miss my point if you want, but I’m trying to make it really clear – where there’s an opportunity to act effectively and where there’s a sense that there’s a danger, of course, they’re going to intervene. But in a lot of cases, you can’t intervene if someone shoots off a firework and then they’re gone. It just is a – it’s not a good use of police time and energy. The way to go at this is at the root, cut off the supply, and engage parents and families telling them they have to step up here too, to help us get kids to stop doing this because it’s not good for anyone and it’s not safe.

Question by Shant from the NY Daily News: Yeah. Good morning, Mr. Mayor – on the fireworks policy, I understand there were people protesting outside Gracie Mansion, honking their horns in protest over the fireworks yesterday. Can you say if that influenced your decision at all today?

Mayor: Not in the least – obviously, Shant, this is something that was being worked on before that.