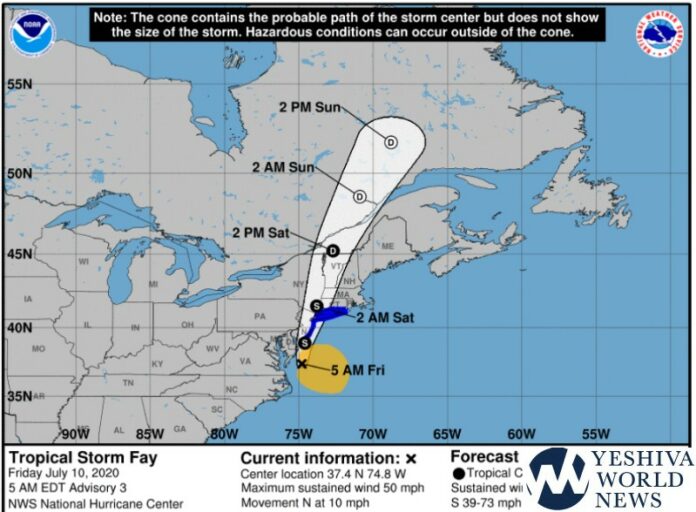 A tropical storm warning was issued for the entire tri-state area ahead of Tropical Storm Fay’s expected landfall on Friday, as the storm churned northward with sustained winds of 50 miles per hour.

By 10:30AM, the storm was already soaking the Jersey Shore and stretching up to I-78, with the worst of the storm expected for northern New Jersey and New York City after 12 p.m.

Nearly all of the tri-state area will likely feel the storm’s impact, with gusty winds, intense surfs and tropical downpours expected. It could lead to flash flooding late Friday into Saturday.

Along coastal sections, winds could climb in excess of 35-45 mph during the afternoon and evening hours. Some spots could get 50 mph gusts. Some power outages could occur as the wind could cause tree limbs to fall. Tropical storms also have the capability of spinning off an isolated tornado and Fay is no exception.

⚠️Here is our latest briefing for #TropicalStormFay poised to impact our area today. The main impacts will be heavy rain, wind gusts up to 50 mph, as well as isolated tornadoes closer to the coastline (including all of Long Island). #NYwx #NJwx #CTwxhttps://t.co/4EPIOfkOS3 pic.twitter.com/nw9oB6yaUd

“I am urging all New Yorkers to stay alert and be careful during these potentially severe weather conditions,” the governor said in a statement. “I am deploying state personnel and resources to communities across the state to ensure they have the support they need to respond to anything Mother Nature may throw our way.”

Conditions may improve as early as Saturday morning. The sun will break out and temperatures could approach 90 degrees. During the afternoon, a cold front will approach bringing the risk of scattered showers and thunderstorms.

It remains hot heading into Sunday with highs at around 90 again.