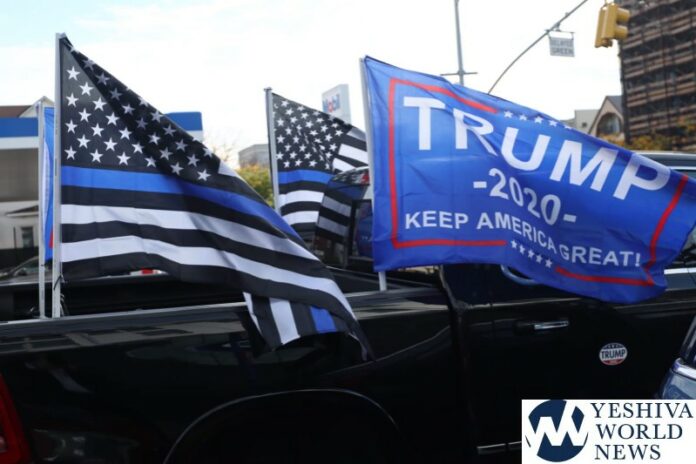 The #JewsForTrump vehicle convoy was attacked multiple times around NYC on Sunday.

The first reports of violence began on the Prospect Expressway in Brooklyn, when an individual began throwing eggs at the vehicles which were heading to Manhattan.

It then escalated to rocks thrown from an overpass on the Gowanus Expressway in Brooklyn.

Then, a Biden supporter was upset that the hundreds of vehicle had practically stopped traffic on the Brooklyn Bridge, and began throwing punches at vehicles.

Around an hour later, things heated up when a vehicle of vehicle occupied by a Jewish family – including young children – was attacked by a woman who aimed pepper-spray into their vehicle. The NYPD quickly made an arrest, and the victim was pressing charges.

And just before 2:00PM, a vehicle was surrounded on 5th Avenue in Manhattan, had its Trump2020 flags ripped off, and had red paint thrown on the vehicle. When the owner of the vehicle exited, he was physically attacked by an angry mob who began throwing punches. The NYPD took suspects into custody in this incident as well.

As YWN reported earlier, about 1,000 cars boasting Trump flags from Monsey, Flatbush, Boro Park and Manhattan, are participating in the vehicle convoys. The car parades will travel toward Marine Park on the outskirts of Flatbush, gathering there about 5 p.m., where the rally will take place and speeches will be delivered.