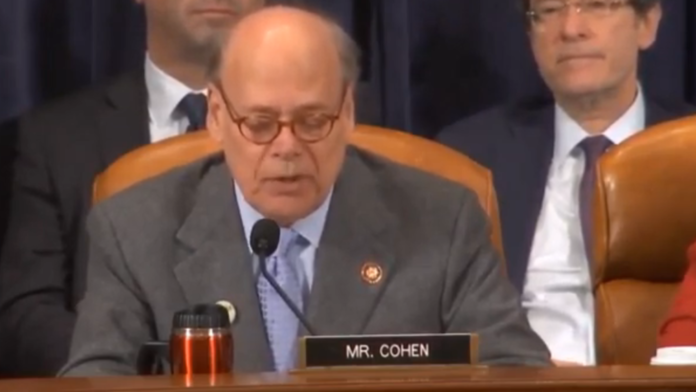 Rep. Steve Cohen (D-TN) went on CNN on Monday, and made two statements that are simply outrageous, and we encourage our readers to watch both of the videos in this article.

The CNN host asked Rep. Cohen whether rioters received advanced reconnaissance tours to help carry out the illegal acts that took place on January 6th at the U.S. Capitol stating, “I want to ask you about something specific because several of your colleagues have alleged that the rioters may have received inside help, including raising the prospects of tours, conducted or with the ok, of fellow sitting Members of Congress. This is quite a charge to make. Have you seen any hard evidence to substantiate that allegation?”

Rep. Cohen responded that he saw Congressman Boebert giving a Capitol tour to a large group between January 3rd and January 6th and made clear that he believed this was a reconnaissance tour led by a Member of Congress that he witnessed stating, “The only thing I’ve seen, Congressman Yarmouth refreshed my recollection yesterday, we saw Congressman Boebert taking a group of people for a tour sometime after the 3rd and before the 6th. I remember they were walking in a tunnel and we saw her and are confident who she was and she had a large group with her…But it’s pretty clear her team, is the team, she’s not on the home team. She was with the visitors.”

Congresswoman Boebert has since refuted his claims and slammed Cohen in a letter she wrote to him and and released to the media stating that Cohen’s claims resulted in “threats to my safety as well as the safety of my family and Congressional staff”.

“It’s unfortunate that you have connected my family being in D.C. for my swearing in with the Capitol riots, so I’d like to directly address what you claim you saw.” Let me be clear—All of your claims and implications are categorically false. I have never given a tour of the U.S. Capitol to any outside group. As I previously stated, I brought my family to the Capitol on January 2nd for a tour and on the 3rd for pictures to commemorate the day I was sworn in as a Member of the U.S. Congress. Again, the only people I have ever had in the Capitol with me in the 117th Congress are my young children, husband, mom, aunt and uncle.”

U.S. Congresswoman Rep. Lauren Boebert (R-CO) @laurenboebert slams allegations made on CNN by Rep. Steve Cohen (D-TN) that she gave a "reconnaissance tour" of the Capitol prior to the riot, when in fact she says it was her "young children, husband, mom, aunt and uncle". pic.twitter.com/5NR03gx4SK

If that wasn’t enough, Cohen then went on to claim that 75% of the National Guard are in the class of people who “may want to do something” at the inauguration. Cohen is saying that National Guard troops who voted for Trump should automatically be suspected of being threats.

All claims of my involvement with the attack on Jan. 6th are categorically false.

These lies are irresponsible & dangerous.

The left would like to bog my name down in conspiracies because they want to slow down my work for the people of CO-03.

I will continue on regardless.