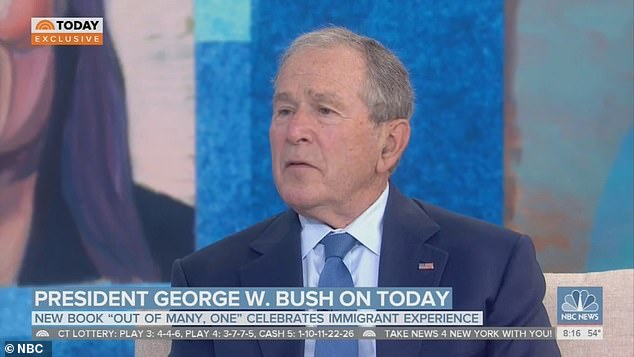 Former President George W. Bush said Tuesday that the trial of Derek Chauvin has been conducted “fairly” as the nation awaits the jury’s verdict in the case.

“I think a lot of people have already made up their mind in what the verdict ought to be,” Bush said of Chauvin’s trial. “The thing we learned after the storming of the Capitol is that our institutions held, and one of the institutions that is really important for the confidence of the American people is a fair judicial system, and I think that’s what’s playing out on our TVs right now.”

Bush said the rhetoric over immigration and the situation at the Southern border should be toned down, adding the Republican Party today has become “isolationist, protectionist, and to a certain extent, nativist.” He did not mention the influence former President Donald Trump’s hardline immigration policies and rhetoric have had on this trend.

Addressing the influx of unaccompanied children at the U.S.-Mexico border, Bush said, “It’s hard for Americans to understand, and I can’t really understand, why a mother becomes so desperate or how a mother becomes so desperate that she’s willing to put her children in the hands of a coyote, a smuggler. And so there’s been a lot of devastation in Central America: political upheaval, earthquakes and gangs and drug lords, and the people are totally intimidated and so they’re streaming to our border.”

However, he added, “I guess I have been, sure.”

“Anyone in particular? No, I think I’m fine. If I did, Michelle Obama might not be my friend,” he said, chuckling.

Bush’s interview with Hoda Kotb of the “Today” show was timed to the publication Tuesday of his new book, a collection of his oil paintings and stories titled “Out of Many, One: Portraits of America’s Immigrants.”