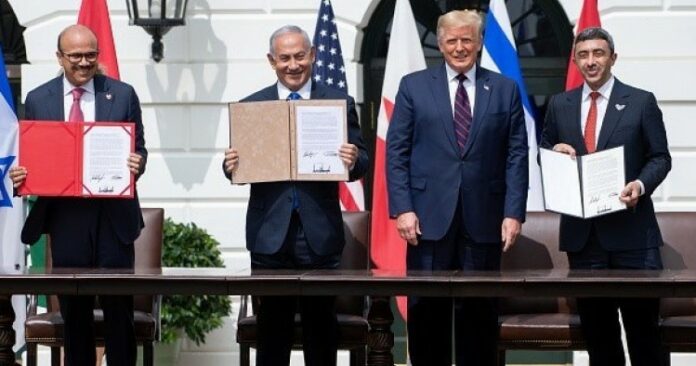 During the one year anniversary commemorative event for the Abraham Accords, the Biden administration representative refused to call the agreement by it’s name.

At the event held at the Jewish Heritage Museum in New York City, US Ambassador to the UN Linda Thomas-Greenfield was representing the Biden administration. She was joined by the UN Ambassadors of Israel, Bahrain, UAE, and Morocco.

During her speech at the event, the US Ambassador referred to Accords as the “normalization agreements” and simply the “accords,” leaving out any mention of the name given to it at it’s time of signing by former President Donald Trump.

Following the event, veteran Hamodia reporter Reuvain Borchardt asked the ambassador did not use the words “Abraham Accords” when she gave her speech. The Ambassador responded “I didn’t recognize that I didn’t”.

“It was not intentional.”

She refused to answer when asked “did anyone ask you not to use that word”.

When Borchardt asked the Israeli Ambassador what he had to say about it.

The statement marked the first public normalization of relations between an Arab country and Israel since that of Egypt in 1979 and Jordan in 1994. The original Abraham Accords were signed by the Emirati Foreign Minister Abdullah bin Zayed Al Nahyan, the Bahraini Foreign Minister Abdullatif bin Rashid Al Zayani, Israeli Prime Minister Benjamin Netanyahu, and U.S. President Donald Trump on September 15, 2020, at the South Lawn of the White House in Washington, D.C. The Accords were negotiated by Jared Kushner and Avi Berkowitz.