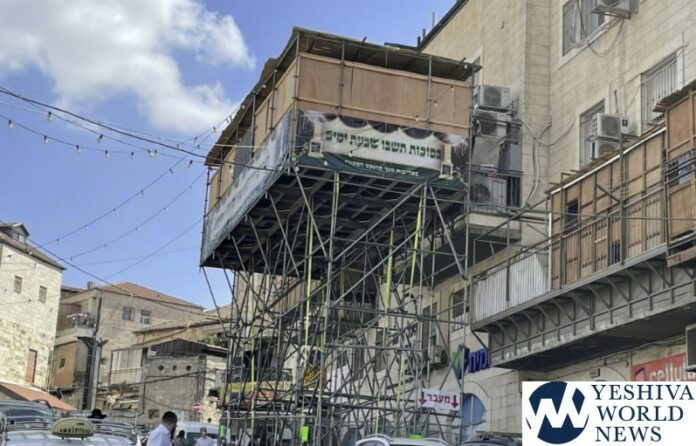 Drama unfolded on Tuesday night as a large police force gathered on Zonnenfeld Street in the Beis Yisroel neighborhood of Jerusalem in order to tear down the large porch Sukkah of Hagaon HaRav Moshe Brandsdorfer, which had been built with an engineering permit.

The Sukkah, which had kicked up a noisy backlash on social media platforms both in Israel and abroad due to its abnormal construction, was built in a way that left more than half of it hanging off of a balcony and over the sidewalk and street. According to reports in the Israeli media and claims made by the owner, the Sukkah has been built in this style for many years and each year is inspected by an engineer to certify its safety.

However, with following the recent tragedies in Meron and Pisgat Ze’ev, social media advocates called for the dismantling of the Sukkah and the municipality of Jerusalem issued an order to dismantle it.

As the police gathered and cordoned off the area, dozens of residents from the neighborhood entered the Sukkah and began to daven mincha in order to prevent the police from dismantling it. Hundreds of local residents swarmed the street and broke through the barricade set up by the police.

According to BChadrei Charedim, HaRav Brandsdorfer put an end to the conflict by summoning the Chief Rabbi of the Police, Rabbi Rami Berachyahu who came to the home of Rabbi Brandsdorfer together with the Chief Police Officer of the Jerusalem district and the three men settled the matter calmly.

According to the agreement, the police would leave the area, and the Sukkah would be dismantled tomorrow afternoon, before Yom Kippur by the family. It would then be rebuilt on the sidewalk in a safe manner.