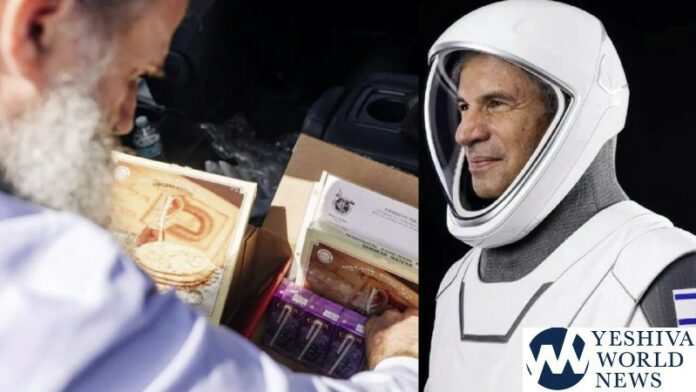 SpaceX launched three rich businessmen and their astronaut escort to the International Space Station on Friday for more than a week’s stay, as NASA joins Russia in hosting guests at the world’s most expensive tourist destination.

It’s SpaceX’s first private charter flight to the orbiting lab after two years of carrying astronauts there for NASA.

Arriving at the space station Saturday will be an American, Canadian and Israeli who run investment, real estate and other companies. They’re paying $55 million apiece for the rocket ride and accommodations, all meals included.

Russia has been hosting tourists at the space station — and before that the Mir station — for decades. Just last fall, a Russian movie crew flew up, followed by a Japanese fashion tycoon and his assistant.

NASA is finally getting into the act, after years of opposing space station visitors.

Friday‘s flight is the second private charter for Elon Musk’s SpaceX, which took a billionaire and his guests on a three-day orbit ride last year.

Only the second Israeli to launch to space, Stibbe will continue a thunderstorm experiment begun by the first — Ilan Ramon, who died aboard shuttle Columbia in 2003. They were in the same fighter pilot squadron.

Stibbe is carrying copies of recovered pages of Ramon’s space diary, as well as a song composed by Ramon’s musician son and a painting of pages falling from the sky by his daughter.

“To be a part of this unique crew is a proof for me that there’s no dream beyond reach,” he said.

Eating hand-made shmurah matzah in space during Pesach may sound like something out of a sci-fi film, but that is exactly what will happen.

Taking the matzah is Israeli astronaut Etyan Stibbe, 64. The former Israeli Air Force fighter pilot and philanthropist was given a box of hand made shmurah matzah as well as other provisions for Pesach by Rabbi Zvi Konikov of Chabad of the Space & Treasure Coasts.

“It’s very exciting,” said Konikov. “As a Chabad-Lubavitch emissary for 31 years, I’ve given out matzah in every single place and every single scenario, now to provide matzah to a Jew who is boarding this space flight and connecting with the International Space Station” is quite different

Not only is Stibbe taking a symbolic piece of Judaism with him to space, he will have the opportunity to fulfill the commandment of eating the matzah there as well, which, said Konikov, “is to me out of this world.”

That Stibbe wanted to have the matzah with him on the International Space Station, “sends a powerful message,” the rabbi continued. “If it’s important that an astronaut, with so much on his mind, just three days before the start of his mission is getting matzah, that sends a powerful message to every Jew wherever they are that they should also make sure they have everything they need for Passover.”

During a press conference earlier this week, Stibbe was asked about celebrating Passover in space and he said “it’s a new thing,” given the mission was postponed to April 8.

“The seder, Passover, is all about freedom which is a value we celebrate annually and remind ourselves about the importance of freedom, [which is] based on a 3,000-year-old story when Moses said the famous sentence ‘Let my people go,’ ” he said.

Stibbe was friends with the first Israeli ever to go to space, astronaut Ilan Ramon who died tragically during a failed landing after a mission in space. Pages of a journal Ramon kept while in space were discovered after the crash and Stibbe will be carrying several of them with him into space.

He noted that one of the mitzvot of the Passover seder is to have four cups of wine, and so he is taking a wine glass with him. “But,” he joked, “I don’t think I’ll find any wine in the Space Station.”

Thanks to Konikov, though, he will have four small cartons of grape juice, though the glass will still be superfluous, as liquids need to be sipped, not poured at zero gravity. What will happen to the matzah crumbs, well that remains to be seen.