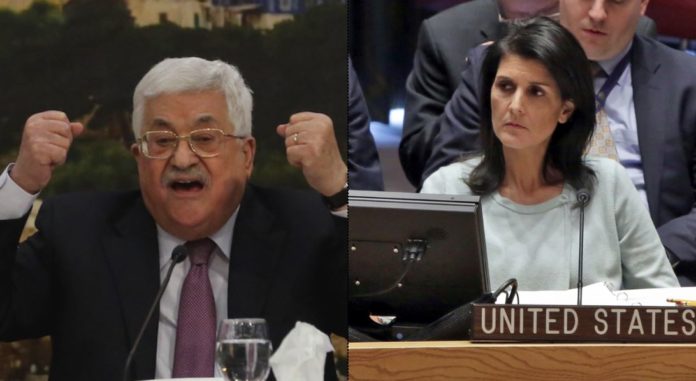 U.S. Ambassador to the U.N. Nikki Haley slammed Palestinian President Abbas during a UN Security Council meeting on THursday, focusing her criticism around a speech Abbas made last week, during which he let out an Arabic curse word directed at Trump.

Haley made the remarks at a meeting of the U.N. Security Council on the Middle East.

“He rejected any American role in peace talks. He insulted the American president. He called for suspending recognition of Israel,” Haley said. “A speech that indulges in outrageous and discredited conspiracy theories is not the speech of a person with the courage and the will to seek peace.”

She pointedly contrasted Abbas with leaders like the late Egyptian President Anwar Sadat, whom she cited as a leader “willing to step forward, acknowledge hard truths, and make compromises.”

“I ask here today, where is the Palestinian King Hussein? Where is the Palestinian Anwar Sadat?” Haley added, referring to Egypt’s former president who in 1977 delivered a speech at the Knesset calling for peace. “If President Abbas demonstrates he can be that type of leader, we would welcome it. His recent actions demonstrate the total opposite.”

“He rejected any American role in peace talks. He insulted the American president. He called for suspending recognition of Israel,” Haley said. “He invoked an ugly and fictional past, reaching back to the 17th century to paint Israel as a colonialist project engineered by European powers.”

“A speech that indulges in outrageous and discredited conspiracy theories is not the speech of a person with the courage and will to seek real peace,” she added.

She said that while the U.S. was “eager” to pursue peace, “we will not chase after a Palestinian leadership that lacks what’s needed to achieve peace.”

The U.N. session came after remarks by President Trump, who spoke alongside Israeli Prime Minister Benjamin Netanyahu in Davos, Switzerland. He said there needs to be more from the Palestinians in terms of the peace process, and threatened to remove funding otherwise.

Trump has threatened to halt aid to its refugee agency if they do not engage in peace talks.

The United States stands as the largest donor to the United Nations Relief and Works Agency for Palestine Refugees in the Near East (UNRWA), contributing around a third of its budget, or about over $365 million last year.

“That money is on the table, and that money is not going to them unless they sit down and negotiate peace,” Trump said on the sidelines of the World Economic Forum with Israeli Prime Minister Benjamin Netanyahu on Thursday.