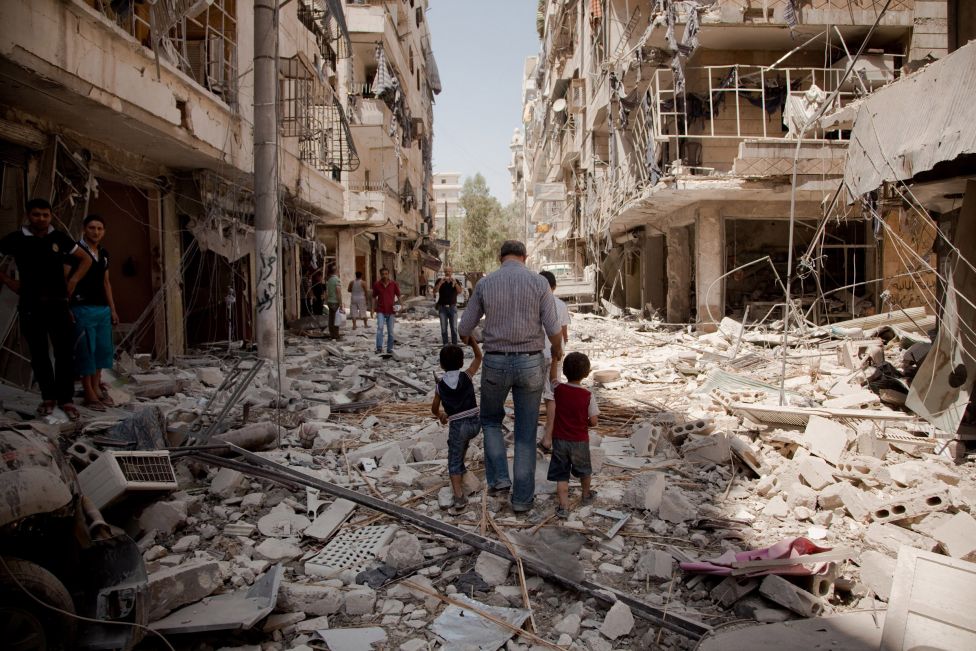 The Syrian capital and its embattled eastern suburbs were relatively calm Sunday despite some violence that killed at least three people, following the U.N. Security Council’s unanimous approval of a resolution demanding a 30-day cease-fire across Syria, opposition activists and residents of Damascus said.

The activists reported low-level clashes on the southern edge of the rebel-held suburbs, known as eastern Ghouta, and two airstrikes late on Saturday night, shortly after the resolution was adopted. During the day Sunday, some more shelling and airstrikes were reported by activists in eastern Ghouta.

The relative calm came after a week of intense airstrikes and shelling that killed more than 500 people in eastern Ghouta and left dozens dead or wounded in the government-held Damascus, which rebels pelted with mortar shells.

“This has been the calmest night since last Sunday,” said Rami Abdurrahman who heads the Britain-based Syrian Observatory for Human Rights, referring to the start of the bombing campaign on Feb. 19.

The Observatory said Sunday’s shelling killed three people and wounded 27 in several areas in eastern Ghouta. The opposition’s Syrian Civil Defense, also known as White Helmets, said the three were killed in the towns of Saqba, Beit Sawa and Hammouriyeh.

Ghouta-based opposition activist Anas al-Dimashqi said the night was calm but warplanes and drones were flying over rebel-held areas. He said several explosions were heard Sunday in Ghouta.

Dr. Sakhr al-Dimashqi, a surgeon at a clinic in Ghouta, told The Associated Press that several shells hit some towns in the suburbs, adding that they received six wounded people at the clinic where he works.

“The shelling today is not as intense as over the past week,” he said.

The two largest and most powerful rebel factions in Ghouta, Failaq al-Rahman and Army of Islam issued statements saying they will abide by the cease-fire unless they are forced to fire in self-defense. Both called for the “immediate delivery” of emergency aid.

Russia’s Foreign Ministry said Sunday that the fight against IS and al-Qaida’s affiliate will continue, despite what it described as attempts by certain external players to engage “international terrorists and groups of opposition militants joining them to implement plans that are still nurtured to overthrow the legitimate authorities of Syria and dismember the country.”

It added that “the terrorists won’t get any respite.”

Damascus residents said there’s more traffic in the streets, compared to previous days and most schools and universities were open on Sunday. They said some private schools were still closed, especially those close to the front lines with Ghouta.

Some residents of the capital said they were unhappy with the truce, adding they believe the rebels will violate it and that the Syrian army should crush the gunmen outside the capital.

“The army has given them many truces, more than they deserve and the result was more shells,” said Damascus resident Abdul-Razzak Khaleifah, 37. “The army has the right to retaliate to defend the homeland and the civilians.”

Saturday’s vote at the United Nations came after the vote was delayed from Friday. Russia’s U.N. Ambassador Vassily Nebenzia had repeatedly called an immediate cease-fire unrealistic.

In a bid to get Russian support, sponsors Kuwait and Sweden amended the draft resolution late Friday to drop a demand that the cease-fire take effect 72 hours after the resolution’s adoption.

After two hours of additional negotiations on Saturday, the Security Council unanimously approved the resolution demanding a 30-day cease-fire across Syria “without delay” to deliver humanitarian aid to millions and evacuate the critically ill and wounded.

After the vote, many council members urged stepped-up efforts to ensure a cease-fire and get assistance to millions in need.

Russia has been a main backer of Syrian President Bashar Assad since the country’s conflict began seven years ago. In 2015, Moscow joined the war on Assad’s side tipping the balance of power in his favor.

In northern Syria, the Observatory and the Lebanon-based Al-Mayadeen TV said Turkish troops shelled the Kurdish enclave of Afrin where Turkey and Syrian opposition fighters it backs have been on the offensive since Jan. 20.

The Turkish military and their allies took three more villages from the U.S.-backed Kurdish militia near the town of Afrin on Sunday, according to the Turkey’s official news agency. The military announced one Turkish soldier was killed on Saturday, bringing the army’s death toll to 33 since the launch of the Afrin operation last month.

The main Kurdish militia, known as YPG, said in a statement that it will abide by the U.N. cease-fire but will continue fighting as usual against IS.