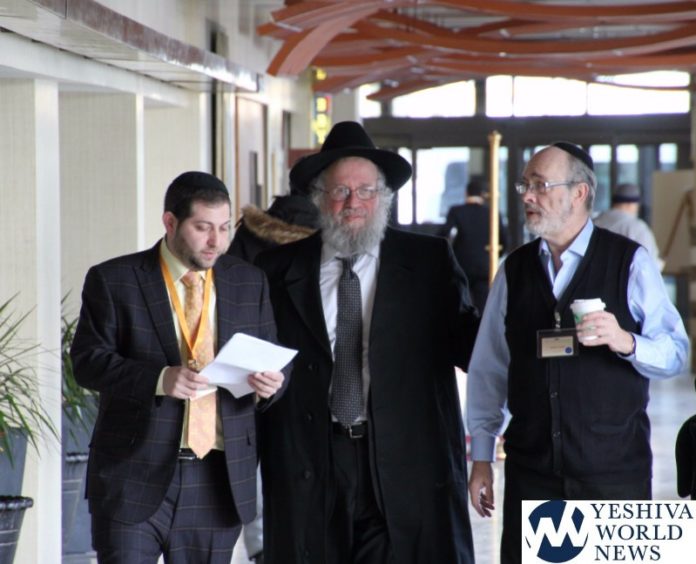 This past Thursday night, as so many Lag B’Omer bonfires that had burned brightly just hours earlier began to dwindle, one of the most powerful lights of our generation was dimmed as well, as noted baal tzedakah Mendy Klein made his way to the olam haemes. A prominent supporter of a seemingly endless array of causes, both in his hometown of Cleveland and around the world, Mendy was a powerful force for the Torah world who carried multiple institutions on his shoulders and literally lived to help others.

I was only blessed to have Mendy in my life for just five short years, but that relatively short span of time felt like a lifetime as I gained a friend and a mentor, one who would teach me what it means to truly live life. Brought together by a shared passion for helping those in crisis, Mendy and I joined forces, and as we created Amudim, there was nothing more that Mendy wanted than to see us go out of business because our services would no longer be needed.

A seasoned and extremely successful businessman, Mendy brought that same skillset and then some to the table at Amudim, using his years of experience to guide, push and prod me in directions that he hoped would yield maximum results. I confess that I wasn’t always the most tractable of students, but he never took no for an answer and he demanded excellence from everyone around him, unwilling to compromise on anything when it came to saving Hashem’s precious children. Their pain was his pain and he stopped at nothing if he thought he could find a way to ease someone else’s suffering.

Early on in our relationship, Mendy told me that when it came to helping those in crisis, money was the least important part of the equation.

“My job is easy,” he said to me. “I just have to write out a check. You have the hard job. You are the one who can’t sleep at night.”

But as time went by, it was clear that Mendy wasn’t sleeping at night either. I would get emails from him with time stamps from all hours of the night, asking me to update him on a particular case that we had discussed several months earlier. He took everything personally and when it came time to raise money for a particular case, it wasn’t enough that he was donating money, he got others to open their wallets as well.

Having been blessed with financial success, Mendy never lost sight of the fact that it wasn’t only the dollar amount that made a donation significant. At our staff retreat this past winter, Mendy told our dedicated team of case workers that his $50,000 donation paled by comparison next to the work that they did on a daily basis. I promise you, it isn’t every day that the people in the trenches get that kind of validation from anyone, let alone from someone as highly regarded and respected as Mendy, and his words of appreciation meant the world to them. Mendy also made it clear that, at the end of the day, his true fortune wasn’t something that could be expressed on a balance sheet but could instead be found in the many family photos that dotted his office.

Mendy’s connections and persuasive skills connected us with Moetzes Gedolei Hatorah and Torah Umesorah and for the first time ever, abuse and addiction were discussed openly at major conventions, with Torah Umesorah dedicating an entire division to keeping our children safe. Under Mendy’s watchful eye, Amudim flourished and what started as a small trickle of phone calls to our office turned into a torrent as people who were suffering reached out to us. But even that wasn’t enough for Mendy. He continued to push to do more, to think outside the box, to get people the help they needed, no matter what it took.

Preferring to stick to the shadows while leaving the spotlight to others, I suspect that Mendy would have been uncomfortable seeing how many people came to honor him on his final journey. Between levayas at the Yavne school in Cleveland, Kever Rochel, a site whose restoration was greatly aided by a donation from Mendy and his wife Ita tblc’t, and Yeshivas Kaminetz, some 5,000 people turned out to pay their respects to Mendy before he was laid to rest on Har Hamenuchos. Mendy was a man who ran away from kavod, but in the end, it found him anyway and no one deserved it more than him.

Mendy’s passing is a monumental loss for klal yisroel, leaving behind a giant void that seems too colossal to fill. Those of us who had the privilege of knowing Mendy can hear his voice echoing in our heads, telling us in no uncertain terms that there can be no excuses – we have no choice but to take up where he left off, because there are still people out there who are suffering. Larger than life, Mendy continues to inspire us and we will perpetuate his legacy by continuing his work, leaving no stone unturned until that joyous day when our services are no longer needed.

Zvi Gluck is the director of Amudim, an organization dedicated to helping abuse victims and those suffering with addiction within the Jewish community and has been heavily involved in crisis intervention and management for the past 18 years. For more information go to www.amudim.org