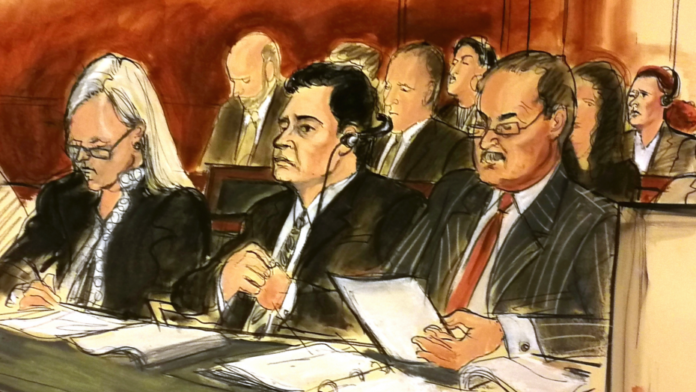 Turkey has criticized the sentencing of a Turkish banker in the United States over his role in helping Iran evade U.S. economic sanctions, in a case that has further strained ties between the two countries.

In a statement late Wednesday, the Foreign Ministry called the trial against Mehmet Hakan Atilla, an employee of Turkish state-run Halkbank, “an entirely feigned process which is inconsistent with the principle of fair trial.”

Turkish government spokesman Bekir Bozdag said Thursday on Twitter that no country has the right to “judge Turkey or Turkish institutions or punish Turkey.”

Bozdag accused the U.S. and the court that tried the case of a plot against Turkey carried out in tandem with a U.S.-based Muslim cleric, Fethullah Gulen, whom Turkey accuses of leading a failed coup in 2016.

Turkish President Recep Tayyip Erdogan accuses Gulen of attempting to overthrow the Turkish government and has demanded that the U.S. extradite him. Gulen, who lives in Pennsylvania, has denied the allegations. His freedom in the U.S. has angered Turkey and caused a rift between the NATO allies.

The trial of the banker has strained the ties further, even though Atilla received a sentence that was seen as lenient.

A U.S. judge on Wednesday ordered Atilla to spend 32 months in prison, including 14 months he has already served after his arrest last year during a business trip to New York on behalf of Halkbank. The sentence means Atilla can return to Turkey in about a year.

U.S. probation authorities had called for a life sentence and prosecutors had argued for a 20-year sentence.

Prosecutors maintained that Atilla used his position as Halkbank’s deputy general manager for international banking to help build and protect a scheme that enabled billions of dollars in profits from Iranian oil sales to flow through world financial markets since 2011.

The U.S. judge justified the shorted sentence arguing that Atilla was just a reluctant “cog in the wheel” of the alleged scheme.

The trial, which ended in January, had featured testimony about corruption at top levels of the Turkish government.

The key witness in the case was Reza Zarrab, an Iranian-Turkish gold trader, who testified he paid over $50 million in bribes to a former Turkish finance minister to help the sanction-busting scheme.

But the testimony that drew Turkey’s fury was from a former Turkish deputy police chief involved in a 2013 corruption investigation into the Zarrab scheme that broadened to include top Turkish politicians.

The government has accused Huseyin Korkmaz of links to Gulen and had dubbed the 2013 investigation a “judicial coup” against the government.

The Foreign Ministry said the evidence presented “eradicated the legitimacy of the trial.”

It also said the court made an “unprecedented decision” in the implementation of U.S. sanctions laws by convicting and sentencing Atilla, “a foreign government official.”