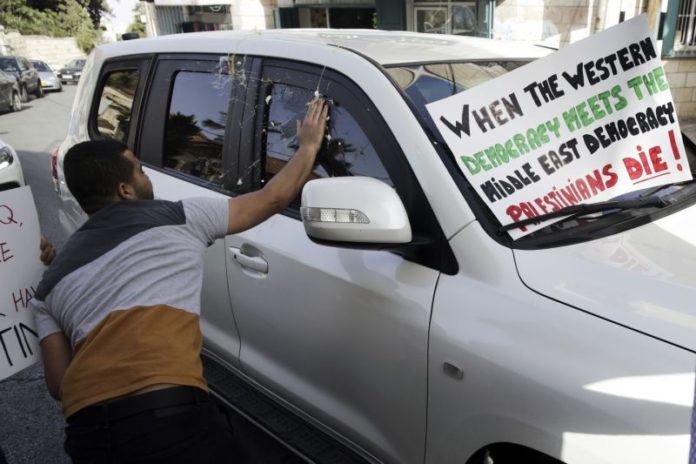 A small crowd of Palestinian protesters in the West Bank on Monday pelted an American diplomatic vehicle with eggs to protest the recent move of the U.S. Embassy to Jerusalem.

The incident drew an angry American response and deepened a crisis in relations that has followed the U.S. Embassy decision.

The State Department said the diplomats were on a visit to “promote educational and cultural exchange” in the West Bank when they were accosted.

“The objective was clearly intimidation. The United States absolutely opposes the use of violence and intimidation to express political views,” the statement said.

The protesters gathered as members of the delegation from the U.S. Consulate in Jerusalem walked to their vehicle. The crowd held signs and shouted at the Americans, before throwing eggs at their car as they drove away. No one was injured.

“We are here to say to the American Embassy, ‘No we don’t need you. Leave Palestine and leave Jerusalem and leave the embassy,'” said Palestinian protester Muhannad al-Said.

This comes just one week after the U.S. Embassy to Israel was moved from Tel Aviv to Jerusalem.

The Palestinians have severed most contacts with the Americans to protest the move.